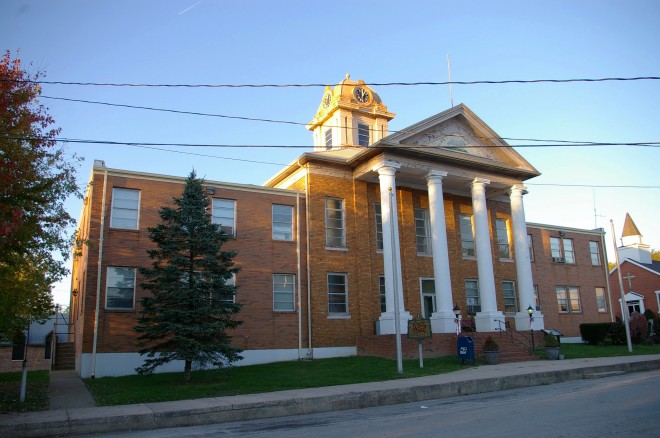 Wolfe County is named for Nathaniel Wolfe, who was a member of the Kentucky General Assembly, and who lived from 1808 to 1865.

Description:  The building faces south and is a is a two story red-orange colored brick and concrete structure. The building is located on landscaped grounds in the center of Campton. At the south front is a large portico supported by four large white colored columns rising to the pediment at the roof with a gable which features a relief of a wolf. Atop the building is a large square dome with gold colored roof and a clock. The roof is hipped and on the wings the roof line is flat. The courtroom is located on the second story. Wings were added to the east and west sides of the building in 1977. The architect and contractor was Federick & May Construction Company. Description:  The building faces east and is a two story red colored brick and concrete structure. The building is located on landscaped grounds in the center of Campton to the west of the courthouse. The east front has a central one story portico supported by four columns. On the south side is a square tower with high arched window, rising above the roof line with clock and pediment at the top. The bottom part of the building is white colored concrete with red colored brick at the center part and white colored concrete below the flat roof line.