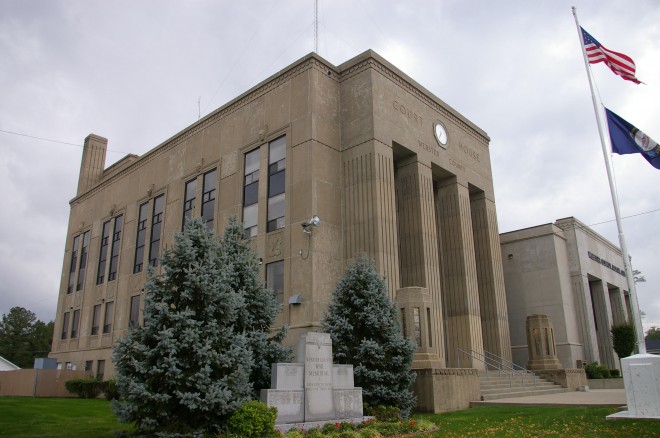 Description:  The building faces west and is a three story poured concrete structure. The rectangular shaped building is located on landscaped grounds in the center of Dixon. The building has a raised basement. The west front has four large concrete pillars forming three rectangular arches, with the entrance in the centre of the first story. Above the arches is a clock. Two large Art Deco lamp are on either side of the wide steps. In the interior, the first story has a central hallway running from the entrance to the rear. The floor and half way up the walls are covered with green colored two-tone marble tiles. The second story has the courtroom and the old jail was housed on the third story. The building was a Works Project Administration project.

Note:  Works Project Administration provided a grant of $143,000. The courthouse is similar to the courthouse in Caldwell County.

See:  The architect,  Lawrence Casner of Madisonville, designed the courthouses in Caldwell County and Hopkins County. Description:  The building faces west and is a two story poured concrete structure like the courthouse which is on the north side in the center of Dixon.. At the west front are three large rectangular arches with glass windows. This front section extends from the main building. On the flat roofline is a decorative cornice. The building houses the County Circuit Court and County District Court of the 5th Judicial District.