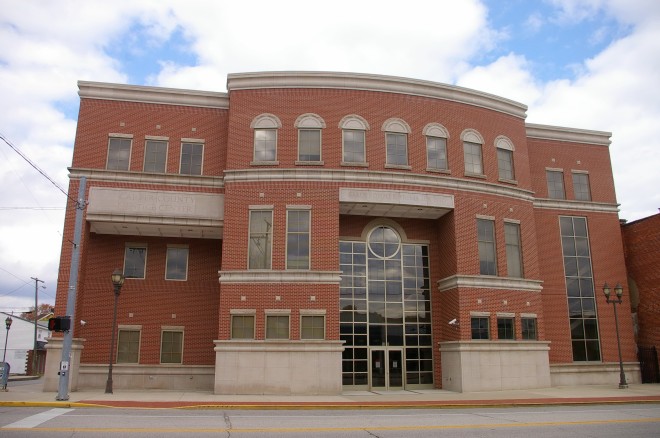 Carter County is named for William Grayson Carter, who was a Kentucky state senator.

Description:  The building faces south and is a three story red colored brick and concrete structure. The building is located in the center of Grayson to the east of the courthouse. The south front of the square shaped building has a projecting curved center section with recessed entrance section on the first and second stories. The central entrance has glass panels rising to the top of the second story. The roof line is flat. Description:  The building faces south and is a two story yellow brick and concrete structure. The building sits on the landscaped grounds of a hill in the center of Grayson. The center section rises to a pediment at the roof line. The building has hexagonal towers at the corners. On the center of the roof is a large square white colored cupola with white colored dome. The former courtroom is on the south side of the second story.  In 1950 and 1963, the west and east wings were added. In 1963, the architect was George A Lusk of Ashland and the contractor was W B Fosson & Sons Contractors of Ashland.