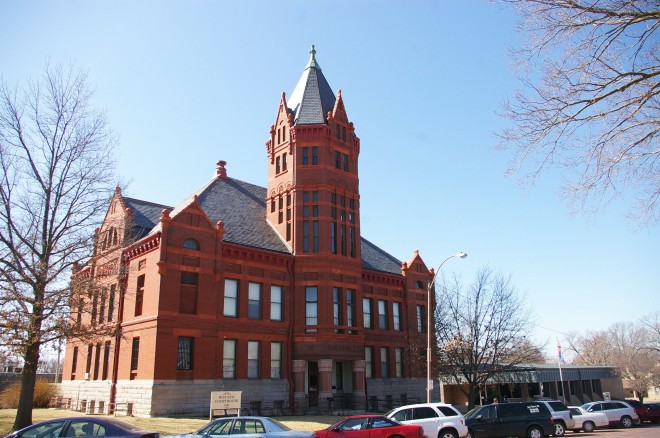 Marshall County is named for Frank J Marshall, who was a member of the first territorial legislature and who operated a ferry on the Big Blue River at Oregon Trail crossing.

Description:  The building faces north and is a two story red brick faced and red colored sandstone structure. On the first store at the central north entrance are polished red colored granite columns. Above the entrance rises an eight sided tower with round north side and topped by a steep roof. The corners of the building have peaked parapets and on the sides are third story parapets with rounded windows. The base is white colored native stone. The roof is hipped. During construction, William Daugherty of Marysville was the superintendent. I B Davis did the excavation work during April of 1891. The building now houses a museum. Description:  The building faces north and is a one story buff brick, glass and concrete structure. The building is located on the west side of the old courthouse. The entrance is along the north end of the east side. A wide green header runs at the flat roof line. The windows are divided by vertical brick sections.