Jewell County is named for Lewis R Jewell, who was a Lieutenant-Colonel in the Sixth Kansas Cavalry during the American Civil War and who died November 30, 1862 at the Battle of Cane Hill. 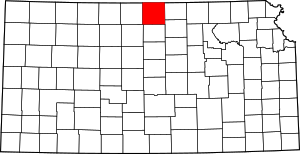 Description:  The building faces east and is a two and three story buff colored limestone and concrete structure. The building is located on landscaped grounds in the center of Mankato. The exterior is rough-cut limestone laid in running bond and a reinforced concrete skeleton structure. The east entrance projects from the main center section and has three entrances framed with white colored concrete. Vertically grooved panels with low relief corn and wheat ornamentation are set within the frontispiece of each bay. The center section rises higher than the north and south wings. Dressed limestone highlights the windowsills and projecting frontispiece of the primary facade, and limestone medallions adorn the north and south walls of the west façade. The roof line is flat. In the interior, the original wood doors with ornate, white colored metal push bars and glazed transoms are intact. Each floor has a north and south running corridor and is accessed by the primary staircase on the east side of the building, as well as a secondary enclosed staircase on the northwest corner of the building. Interior finishes consist of vinyl floor tile, glazed block wainscoting, plastered walls and ceilings, and oak doors and trim. The courtroom is located on the second story and is a story and a half in height. The building houses the County District Court of the 12th Judicial District. The building was a Works Projects Administration project. O J Metz was the project superintendent. In 1982, the north wing was constructed to house the jail.

See:  The other courthouses in Kansas which were constructed with federal government funding under WPA and PWA are located in Ellis County and Kearny County.