Cowley County is named for Matthew Cowley, who was an American missionary and a member of the Quorum of the Twelve Apostles in The Church of Jesus of Latter-day Saints. 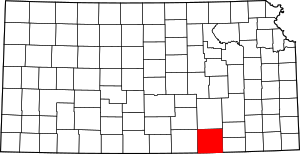 Description: The building faces north and is a two story buff colored stone, glass and concrete structure. The building is located on landscaped grounds in the center of Winfield. The north front has a large stone section in the center with a map of the county. On the east side of the stone section is the glass entrance. Brown colored panels run below the first and second story horizontal windows. The roof line is flat. The building houses the County District Court of the 19th Judicial District. Along the south side is the large jail addition constructed in 2006 to 2008. To the north across the street is the one story Courthouse Annex. Description: The building faces south and is a two story red colored brick, limestone and concrete structure. The building is located on landscaped grounds in the center of Arkansas City. The foundation is native stone. The south front has a wide projecting porch with ten tall Doric columns rising to a wide header at the top of the second story. The recessed entrance is framed with stone and has a small pediment above. A projecting cornice runs below the flat roof line. The building houses the County District Court of the 19th Judicial District.