Lyon County is named for Nathaniel Lyon, a soldier from Iowa, who was the first United States general killed in the American Civil War. 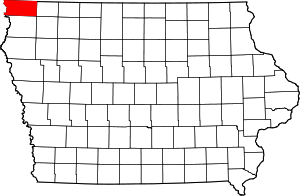 Description: The building faces north and is a three story gray colored stone and concrete structure. The building is located on landscaped grounds in the center of Rock Rapids. The north front has a projecting entrance section in the center. There are eight columns rising from the second story to the top of the third story with recessed windows. A cornice runs below the wide band along the roof line. The roof line is flat. In the interior, the main staircases and corridor wainscoting are of Italian marble, while the floor of the rotunda displays the county seal in a mosaic of ceramic tile. The third story, which houses the legal and judicial functions and the courtroom, displays in the rotunda area four semicircular murals, set within the tympana of the arches which open off the rotunda to the corridors. These murals, Entitled “Pioneer”, “Immigrant”, “Rock Rapids 1873″, and “Modern Farm 1917″ were possibly the work of artist William Peaco (Peace’s “Pioneer” and “Immigrant” murals in the Greene County Courthouse, Jefferson, are remarkably like those at Rock Rapids). The courtroom on the third floor is also of note, featuring an early jury box (with swivel chairs bolted to the floor), judge’s bench and chair, and fine aedicular doorframes. With the exception of new lighting in some areas and the partitioning of one ground-floor room, the interior spaces of the courthouse are essentially untouched. The building houses the County District Court of the 3A Judicial District.

History:  The county was created in 1851 and Rock Rapids was designated as the county seat. The county was attached to Wodbury County ( Wahkaw County ) for administration until 1872. The first courthouse was three story frame structure designed by O H Cheney and built by S C Hyde in Rock Rapids in 1874 to 1875 at a cost of $15,000. The building was moved a few blocks and was used as an apartment house. The second and present courthouse was constructed in 1916 to 1917 at a cost of $109,695.