Iowa County is named for the Iowa River which flows through the county and is named after the Ioway Native American tribe. 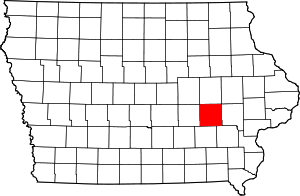 Description: The building faces east and is a two story buff colored Berea stone structure. The east front has a central tower rising 137 feet with arched entrance on the first story and rising to an octagonal tower at the fourth story with red colored conical roof above. The north and south sections project slightly from the building. On the north and south sides are small turrets rising above the roof line. The building houses the County District Court of the 6 Judicial District.