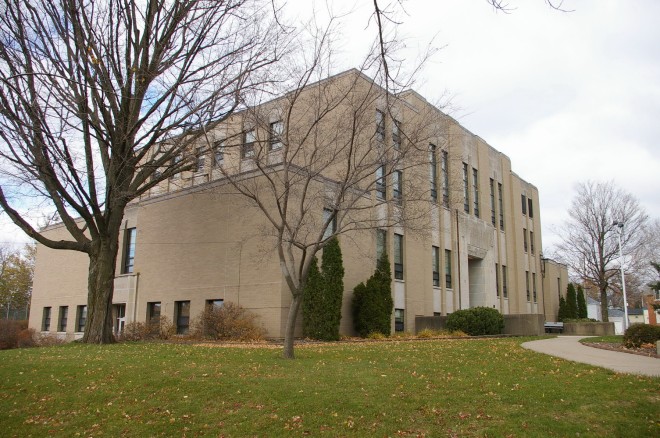 Allamakee County is named for Allan Makee, who was a trapper and trader. 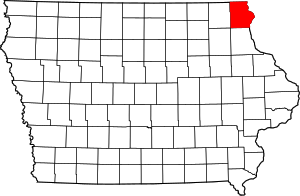 Description: The building faces east and is a three story buff colored brick, stone and concrete structure. The building is located on a rise of land on the landscaped grounds of the Courthouse Square in the center of Waukon. The east front has stone trim around the central entrance. The windows are vertical in length with panels between them. The roofline is high in the center section and drops lower on the north and south and drops to one story on the north and south wings. The roof line is flat. In the interior there is a central hall plan. The central staircase is located at the front entrance. The steps are made of black colored terrazzo with gray colored marble along the walls. The courtroom is located on the west side of the second story.  The original swinging gates in the bar are finished in a diamond pattern of matching walnut veneer. The ceiling extends into the third story and the walls are covered in walnut paneling. Black colored marble is used in the baseboards. The building houses the County District Court of the 1A Judicial District. This was a Public Works Administration project. Description: The building faces west and is a two story red colored brick structure.  The building is located on landscaped grounds in the center of Waukon to the east of the courthouse. The west front has a central arched entrance on the first story with wide fan light. In the interior, a symmetrical, divided-flight stairway with two outside ascending flights still retains large wooden newel posts and slender spindles. The ceiling of the first story between the flights is covered in decorative pressed tin. Most of the original woodwork is still intact, the majority being of a simple Greek Revival style. The courtroom on the second story bears paired scrollwork brackets below the window cornices. The architect and contractor were  The building now houses a museum.

Description: The building faces east and is a two story bluff colored brick structure. The building is located on landscaped grounds to the south of the center of Lansing. The east front has a recessed center section with two thin white colored columns rising to a header at the top of the second story. The east and west ends are a pediment at the hipped roof. The building is now an apartment building.