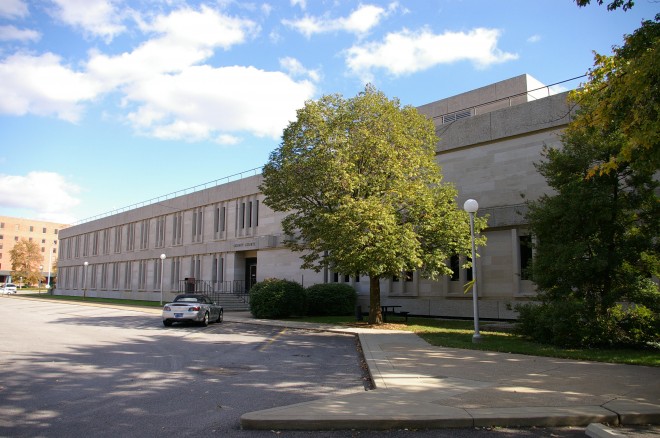 Vanderburgh County is named for Henry Vanderburgh, who was a territorial judge.

Contractor:  Hironimus, Knapp, Given, Gruebel and Saletta of Evansville.

Description:  The building faces south and is a two story rectangular white colored stone and concrete structure. The windows are vertical and narrow with a wide horizontal concrete ban between the first and second stories. The roof line is flat. 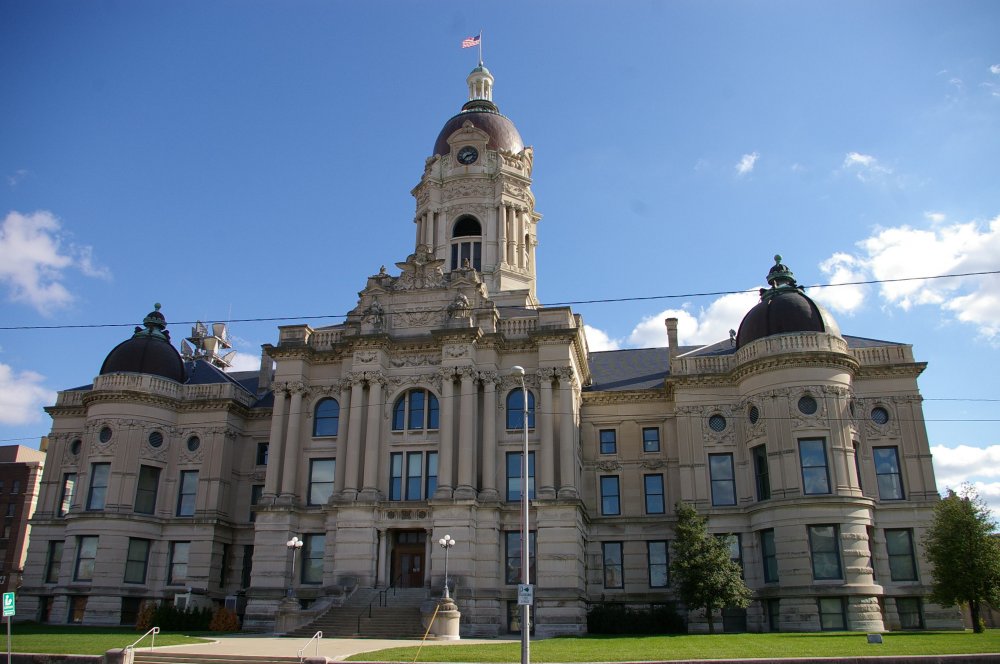 Description:  The building faces north and is a three story gray colored limestone structure. The building occupies an entire block. Each side of the building is encrusted with magnificent sculpture and stone carvings in Indiana limestone. The fourteen main statues of human figures are the work of Franz Engelsmann, who studied under the great German masters before setting up his studio in Chicago. In addition, carvings of vegetables, fruits, and flowers indigenous to the area adorn the capitals of the forty-eight pairs of pilasters around the entire building. Each corner has a round tower with black colored dome. On the center of the roof is a large dome with clock and small cupola at the top. The building was remodeled in 1980. The architect was Frite Anderson.

The bell tower, as unique as the statues and carvings on the exterior of the building, rises above the Old Courthouse to a height of 216 feet. The first level of the tower is enclosed but surrounded with windows which allow an abundance of sunlight to enter. The next level is open and houses the 4,500 pound Old Courthouse bell. The bell, manufactured by McShane Bell Foundry located in Baltimore, Maryland, has tolled at the Old Courthouse since August 20, 1890. The next level is enclosed and houses only the pulleys and inner workings of the clock. The four faces of the clock, each measuring seven and one-half feet in diameter with one facing each side of the building, are found on the final level of the tower. Finally, found on this level of the tower is a suspended staircase which winds to the top of the copper-clad central dome of the Old Courthouse; the base of the cupola sits atop the dome.

Protecting the Court Street entryway to the Old Courthouse is a great eagle with its wings widespread perched upon a shield, denoting not only the national emblem but a standard of the ancient Romans. Directly below the eagle are large Roman numerals carved into the limestone embedding the date construction was begun. As you face the Old Courthouse, to your left sits the Goddess of Manufacturing and Industry who holds a hammer in her right hand, which rests upon an anvil, and the cogwheel of industry in her left. To her left side sits a locomotive depicting the mode of transportation prevalent at the time. To your right sits the Goddess of Agriculture resting her left hand on a plow and surrounded by symbols of the farm: a sheaf of grain, a hamper of vegetables, and a bee hive. Above the arches of the doorway proper are two cherubs. The one on the left is female as it is holding a nest, thus the care giver; the one on the right is male, holding a bow and quiver, hence the hunter.

High above the Fourth Street entryway to the Old Courthouse sits a grouping of three statues thought to represent the quest for knowledge and truth. The central figure wears a crown and holds a crusader’s sword in her left hand while decidedly posturing her right hand on her leg. To her left is the only male statue on the building; he rests his right arm on a stack of books and holds in his left hand a tablet. To the right of the central figure is a statue who holds a torch in her right hand and rests her left arm also on a stack of books. Directly below this grouping is a carving of the Seal of the State of Indiana, depicting a wooded scene with a hunter and buffalo and encircled with giant oak leaves symbolizing distinction. Above the arches of the doorway proper are two muses, or Greek goddesses. Depicted to preside over music, the one on the left holds a harp in her right hand; depicted to preside over painting, the one on the right displays a palette in her left hand.

Similar to Fourth Street, a grouping of three statues thought to represent justice is found above the Fifth Street entryway to the Old Courthouse. The central figure holds the scales of justice in her left hand, with a staff in her right hand. The symbolism of the three raised fingers at the top of her staff as well as the serpent intertwined in her hair is unclear. The statue on the left holds a tablet in her left hand while the statue on the right holds a torch in her right hand. Directly below this grouping again is found the Seal of the State of Indiana, and there are muses above the doorway arches. The one on the left holds a mallet in her left hand and a bust in her right hand, presiding over sculpture. The one on the right holds a book in her left hand, presiding over literature. Although it does not date back to 1890, the revolving door for entering the Fifth Street side of the building is one of the oldest revolving doors remaining in use in Evansville.

There are some noticeable similarities between the Vine Street entryway of the Old Courthouse and the Court Street side. The American eagle again perches atop this side of the building, and the Roman numerals reading 1888 are again found below the eagle. However, the goddesses on this side of the building are different from those sculpted on Court Street. As you face the building, to your left sits the Goddess of Commerce and River Trade whose left hand rests on the prow of a boat, a chain and an anchor. She is surrounded by symbols of the late 1800s riverfront such as bales, barrels, and crates. To your right sits the Goddess of Learning with scrolls at her feet and a tablet in her right hand. Another similarity to Court Street is found above the arches to the doorway proper with the cherubs representing male and female being sculpted again. However, their positions have been reversed with the male being on the left and the female on the right side of the arches. 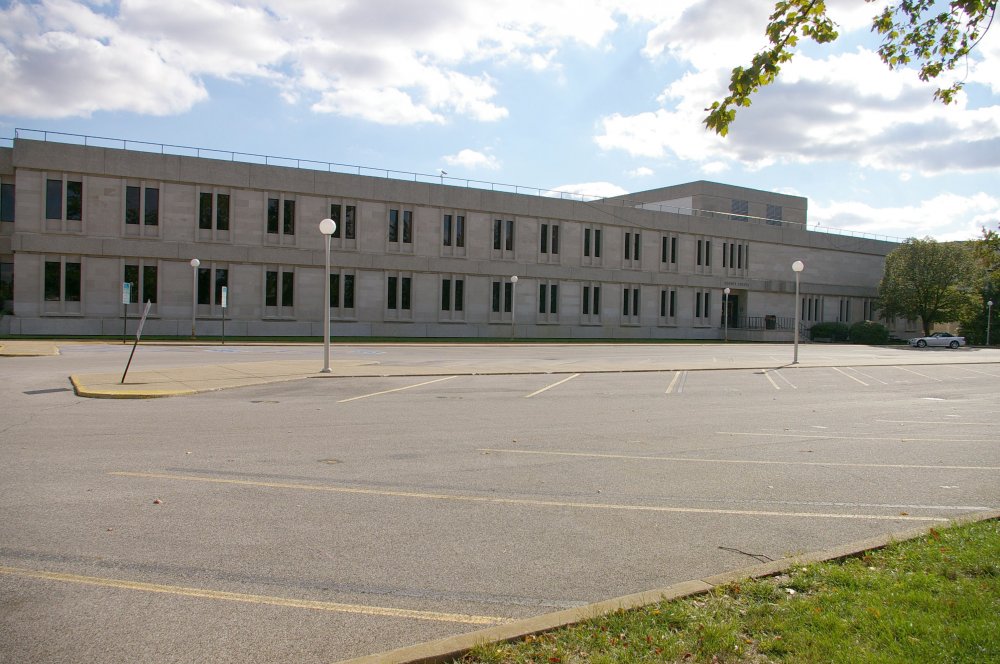 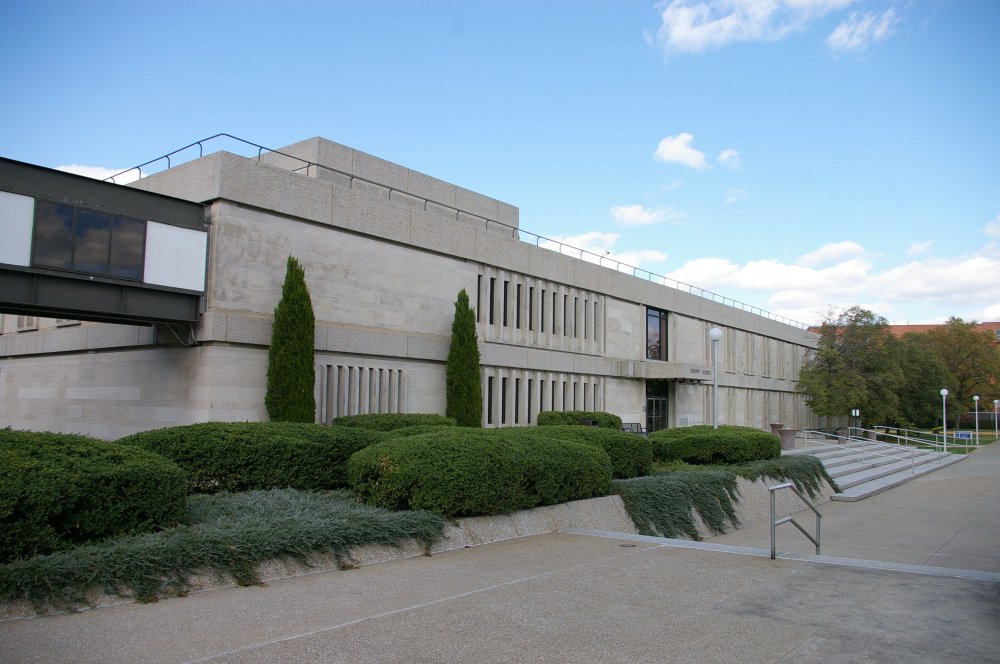 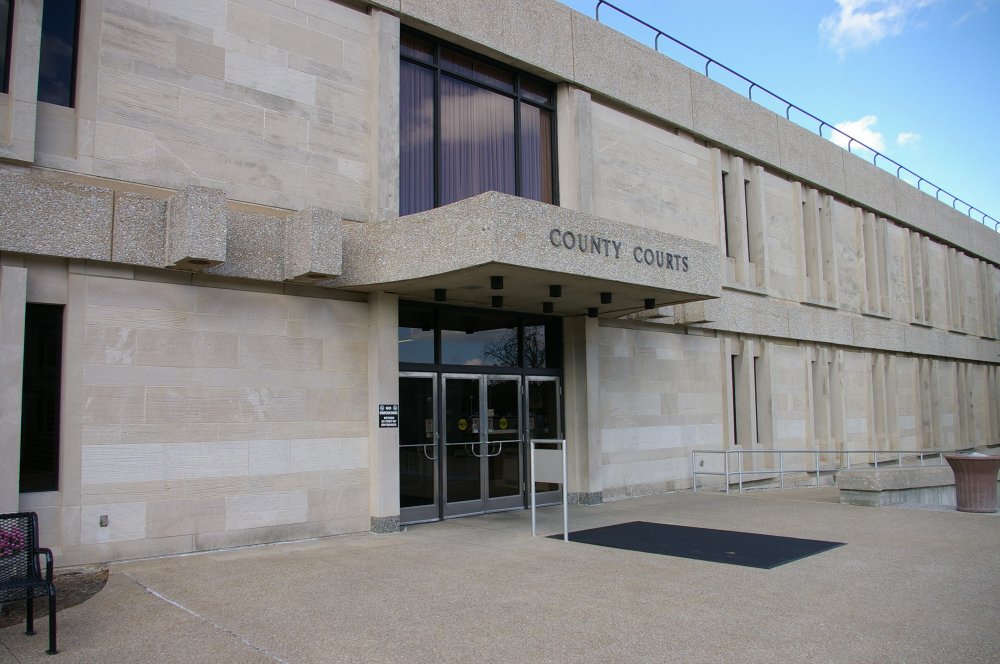 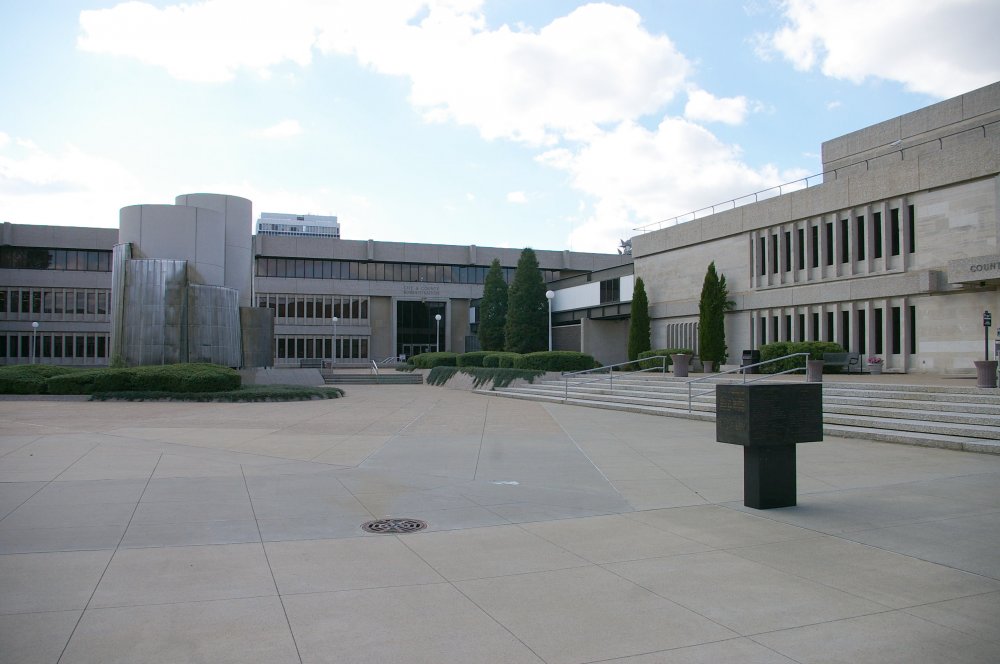 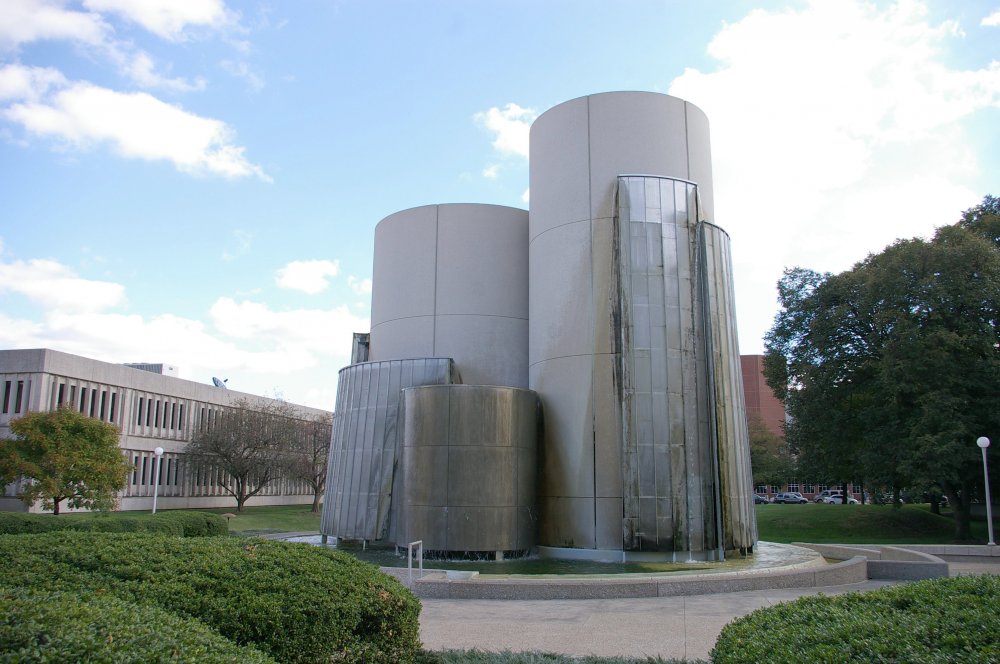 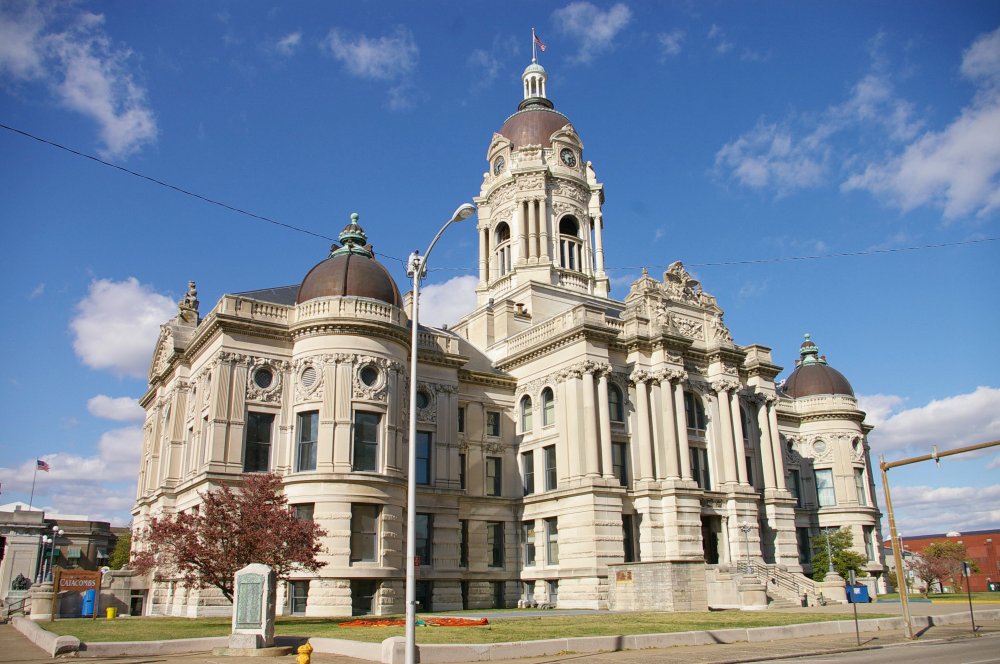 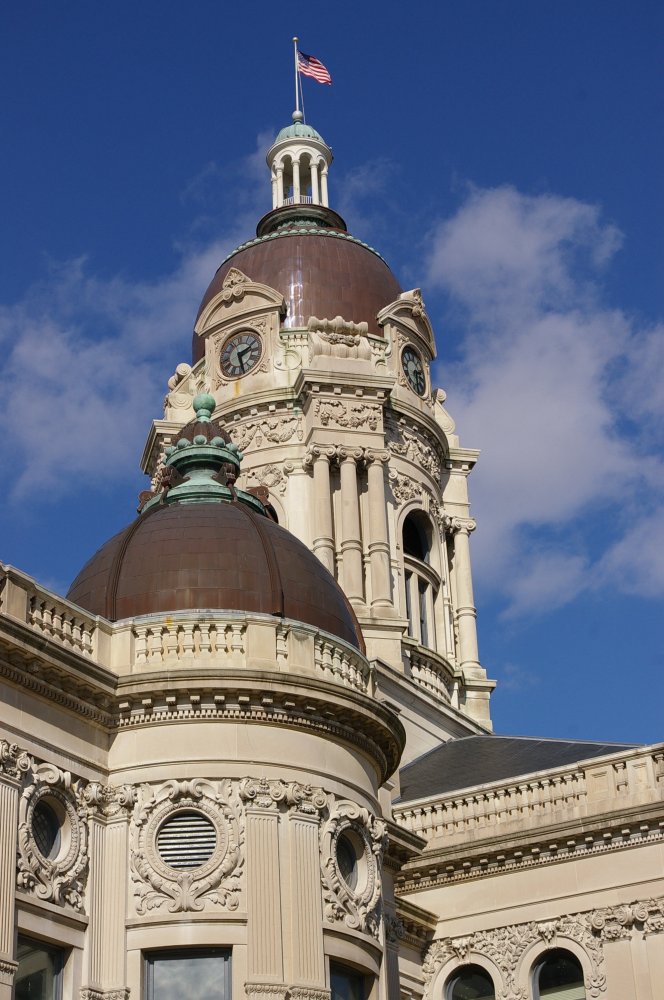 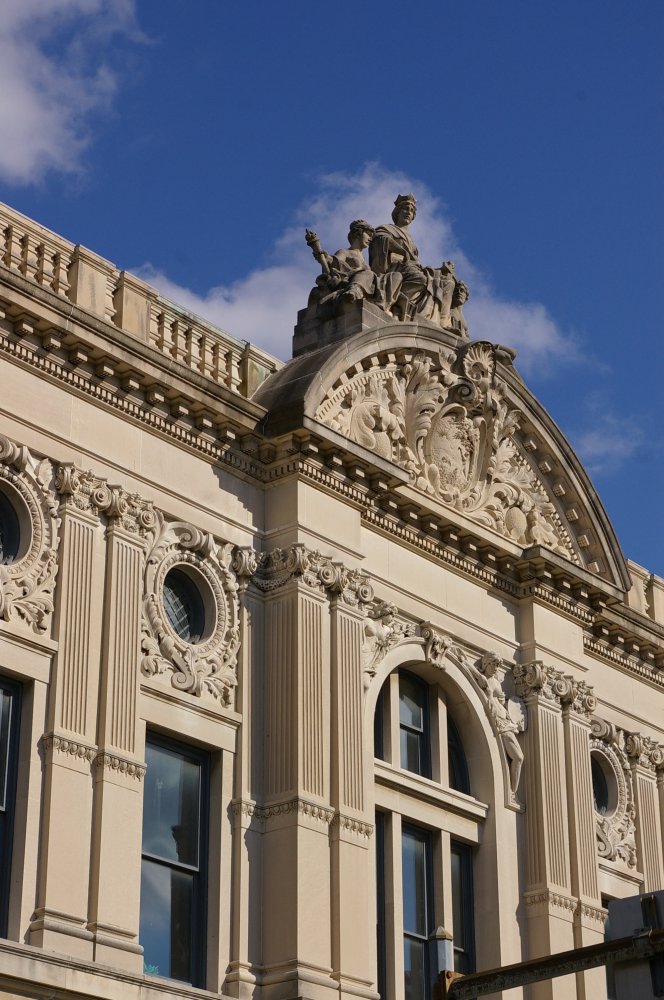 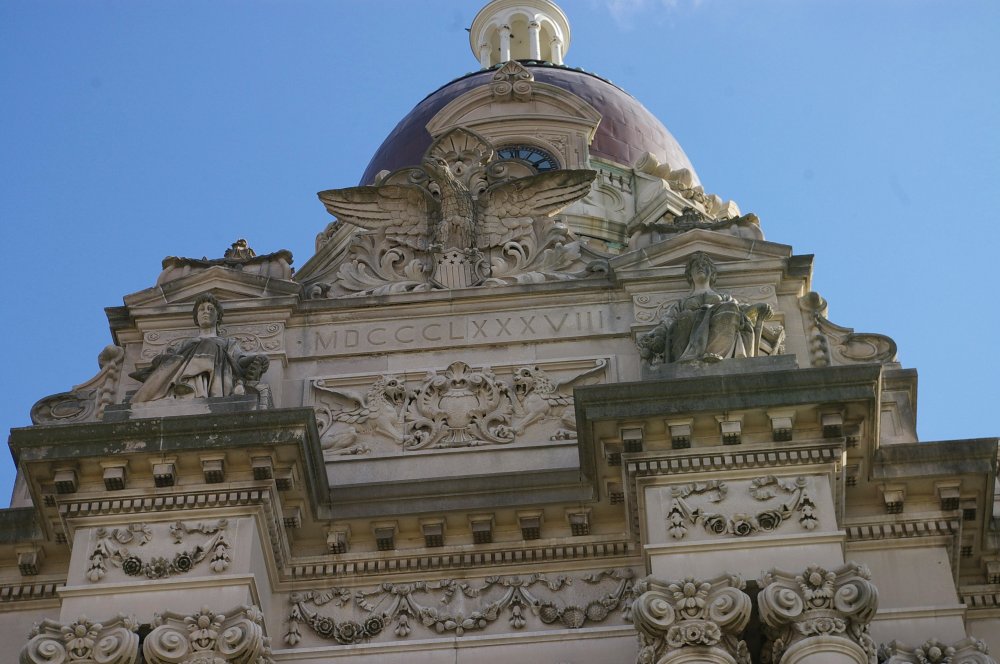