Tippecanoe County is named after a Miami Indian word “Kethippecanoogi” which means “a place of the succor fish people”. 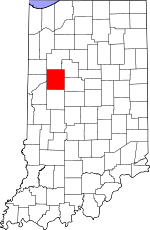 Description:  The building faces east and is a five story stone and brick structure. The building is located on the landscaped grounds of the Public Square in the center of Lafayette. Each side has a portico with three stone framed entrances on the first story and four columns rising from the second story to the top of the third story and having a pediment above. On either sides of the porticos are projecting wings with columns rising from the second story to the top of the third story, and having steep roofs with dormers. On the center of the roof is a high round silver colored dome tapering to a small cupola with a statue of Justice. Beneath each of the four clock faces is a niche containing a 9 foot female figure in classic form representing one of the four seasons. Other statuary is in the central group of figures (Justice, Industry and Agriculture) of the east and west pediments. Those in the identical north and south pediments portray Clark, hero of the old Northwest, George Washington, and a Shawnee Indian chief of Tippecanoe fame. In the interior, the trim is wood ornately carved. The basement and first story were finished in red oak, the second and third in ash, all of heart-wood quality. Nearly all fireplaces have been covered but some remain. The marble tile floors have largely been covered with terrazzo. Two stair wells are located at the north and south arms of the cross which form the shape of the building. Their heavy iron but gracefully shaped balustrades are matched by a similar railing around the central rotunda at the second and third story levels. The courtrooms are located on the third and fourth stories and are finished with red oak wainscoting. The building houses the County Circuit Court and the County Superior Court of the 10th Judicial District.

Note:  The contract for its erection had been awarded to Farman & Pearce, a non-local firm, for $207,999 but Farman died in 1882 before completion of the first floor necessitating a second call for bids to finish the structure. Charles Pearce of the previous partnership was the successful bidder at $24l,OOO with Elias Max to be his builder and James F. Alexander superintendent of construction.