Randolph County is named for Peyton Randolph, who was the first President of the Continental Congress. 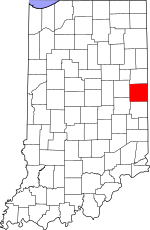 Description:  The building faces east and is a two story red colored brick and stone structure. The building is located on landscaped grounds in the center of Winchester. The east front has a small portico supported by thin columns. The front center section projects from the main building. There is stone trim at the corners and around the windows. A wide cornice follows the flat roof line. The building was remodeled in 1954 and restored in 2011. The architect was Taylor Architects Inc. and the contractor was Oberle & Associates.