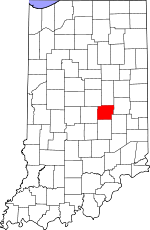 Description:  The building faces north and is a three story buff colored stone structure. The building is located on the landscaped grounds of the Courthouse Square in the center of Greenfield. The building has a raised basement. The center section is recessed with a large stone arch framing the entrance on the first story. On the center of the roof is a high square clock tower with turrets and steep red colored roof at the top. In the interior there are divided staircases ascending to the second story. The hallways and ceiling are decorated with motifs. The building houses the County Circuit Court and County Superior Court of the 17th Judicial District. To the east is the Old County Jail (1871) and to the southeast is the County Court Annex. Description:  The building faces west and is a two story red colored brick and concrete structure. The building is located in the center of Greenfield. The west front has a semicircular portico supported by four columns with balcony on the second story. The roof line is flat.