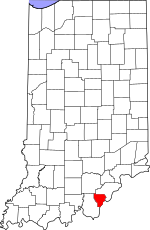 Description:  The building faces northwest and is a four story glass and concrete structure. The rectangular shaped building is located on landscaped grounds in the center of New Albany. There is a canopy at the first story entrance on the northeast side. The windows are horizontal and divided by narrow vertical concrete dividers. There are yellow colored panels between the stories. The roof line is flat. The building contains the New Albany city offices. The building houses the County Circuit Court and County Superior Court of the 23rd Judicial District.

Note:  The columns from the 1867 have been placed beside the present courthouse.