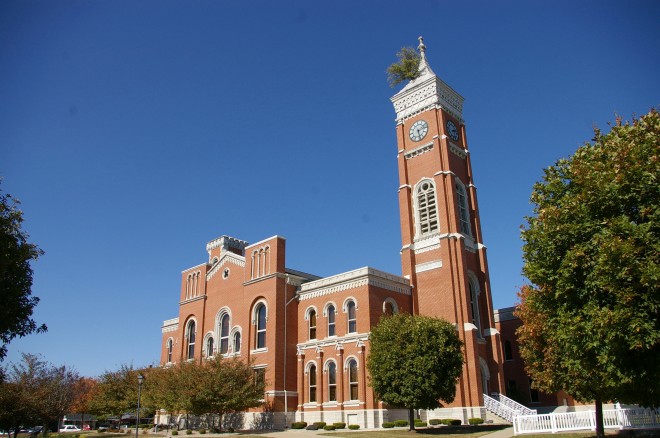 Decatur County is named for Stephen Decatur, who served in the Barbary War and War of 1812 as a naval officer. 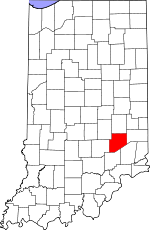 Architect:  Edwin May of Indianapolis

Description:  The building faces east and is a two story pink colored brick structure. The building is located on the landscaped grounds of the Courthouse Square in the center of Greensburg. At the east side is a high square brick clock tower with peaked roof and a tree growing from the roof. The center section of the building has a raised roof and arched windows. On either side are smaller two story sections with flat roof. At the west side is a high Italianate style tower. In the interior, the courtroom is located on the second story of the addition. The building houses the County Circuit Court and the County Superior Court of the 21st Judicial District. The building was remodeled in 1898 to 1890. The architect was McDonald Brothers. In 1977, the building  had exterior renovations completed. The architect was Howard J Barth & Associates and the contractor was Guaranteed Maintenance Corporation. In 1997 an addition was added on the west side. The architect was .Schmidt Associates, Inc. and the contractor was Bruns-Gutzwiller, Inc.

Note: During construction, the bricks were provided by W H Risk and Benjamin H Burton of Franklin County.

Note:  There is a mulberry tree growing from the top of the tower. In the early 1870s, it was noticed that a tree was growing on the roof. Soon four more trees were counted on the roof of the one hundred and ten foot steeple. This rapid growth of trees raised fears among county officials that permanent damage would be caused to the tower. In 1888, a steeplejack was hired to help workers scale the building and remove a few of the shrubs. Of the two trees left, one eventually reached a height of fifteen feet, with a base diameter of five inches. At some point, another tree began to grow on the southeast corner of the tower and reached a large height within a few years. As this tree was growing, another tree sprung up on the southwest corner. 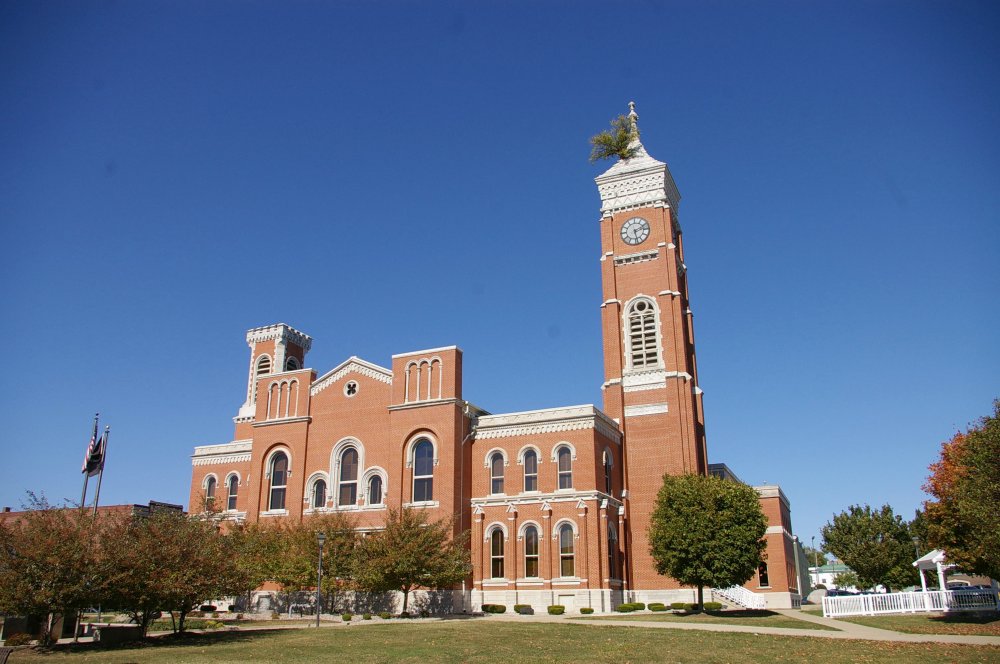 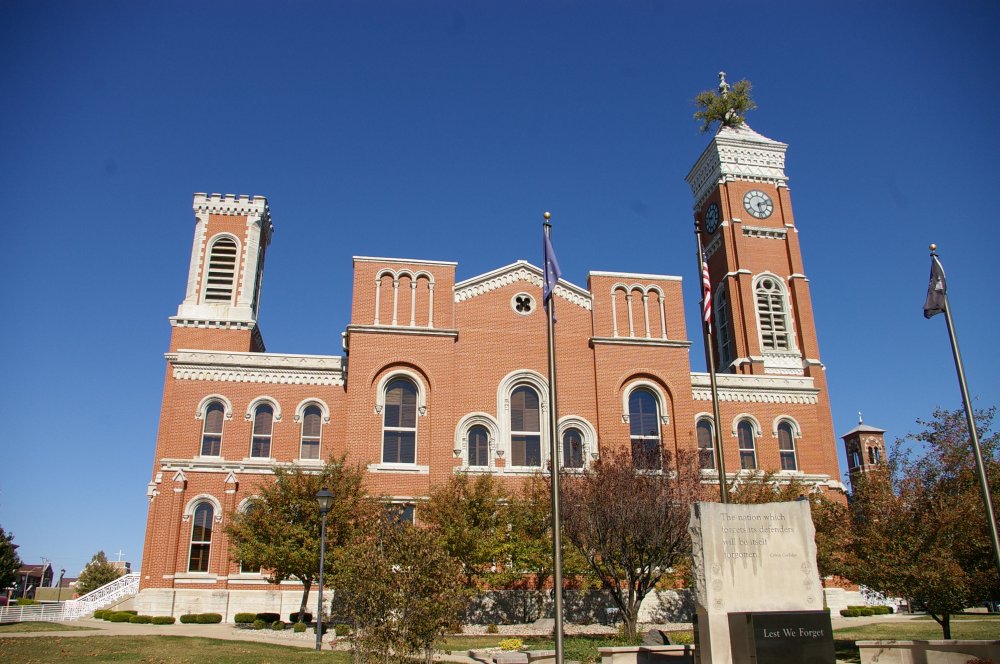 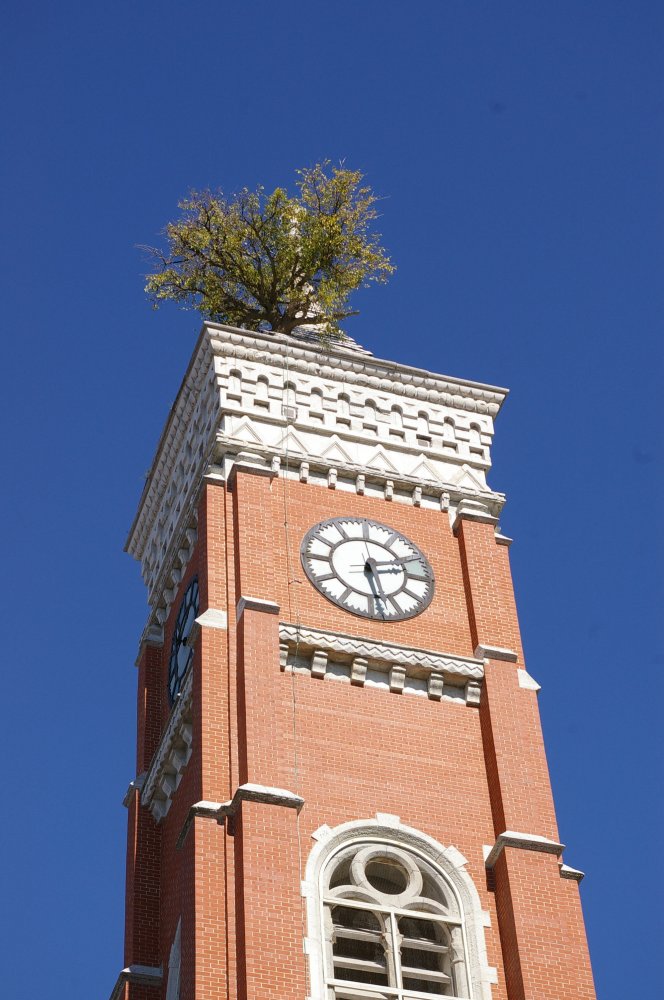 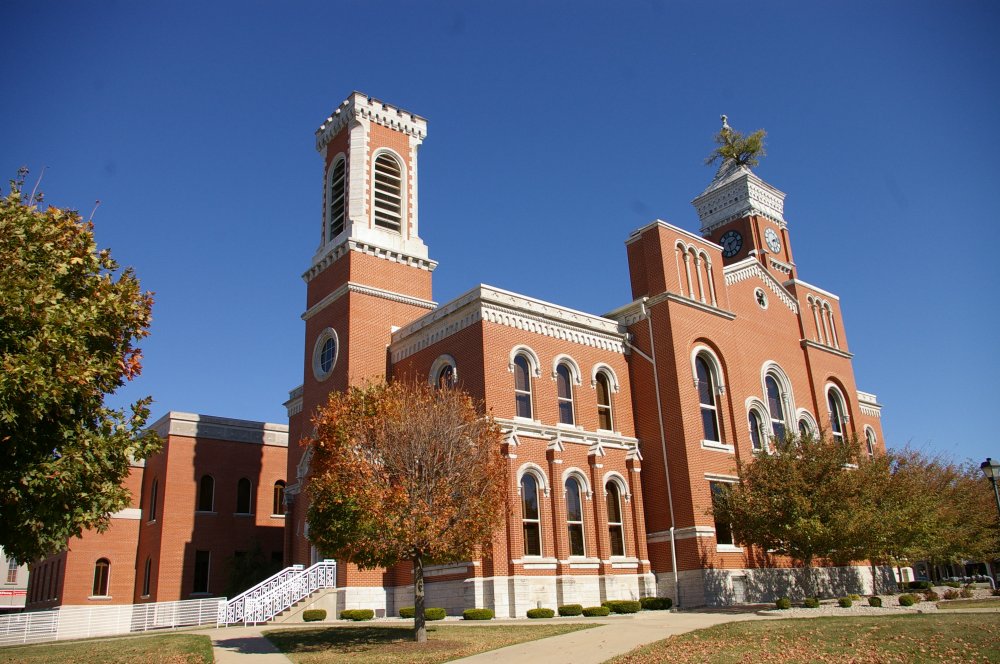 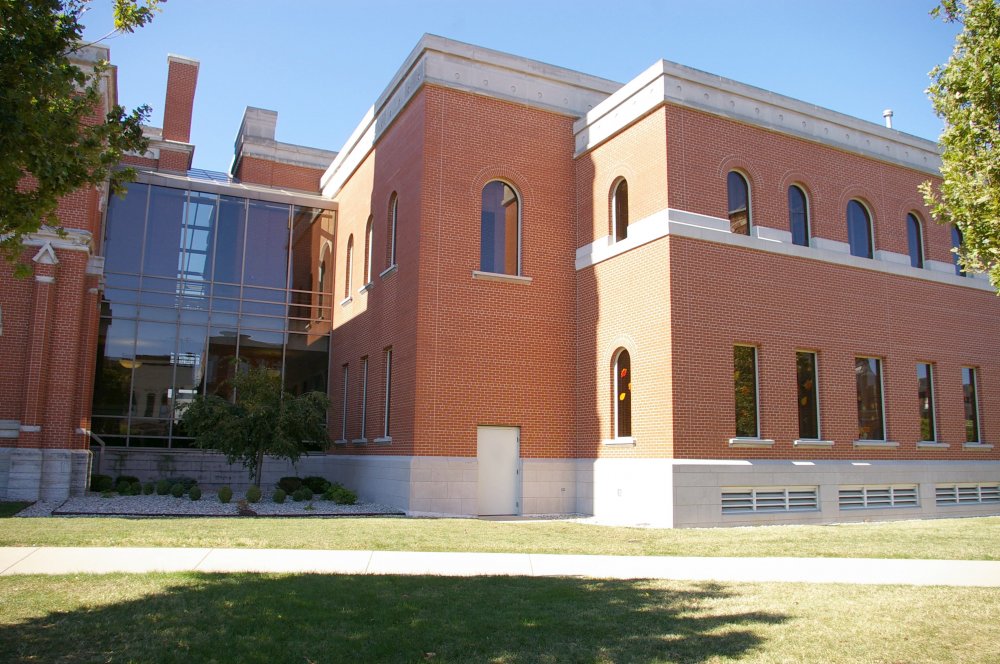 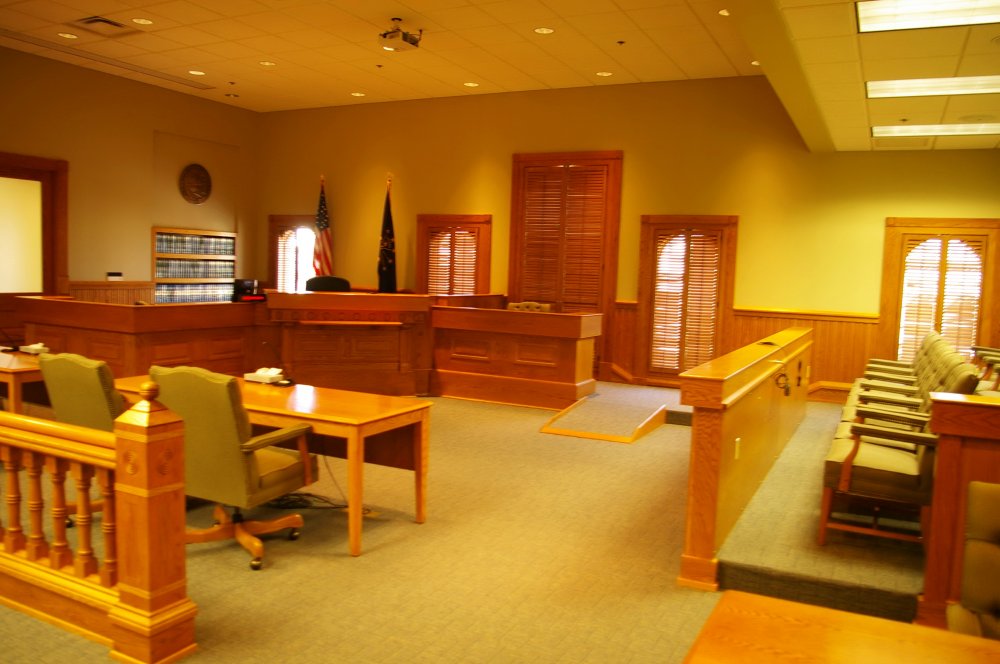 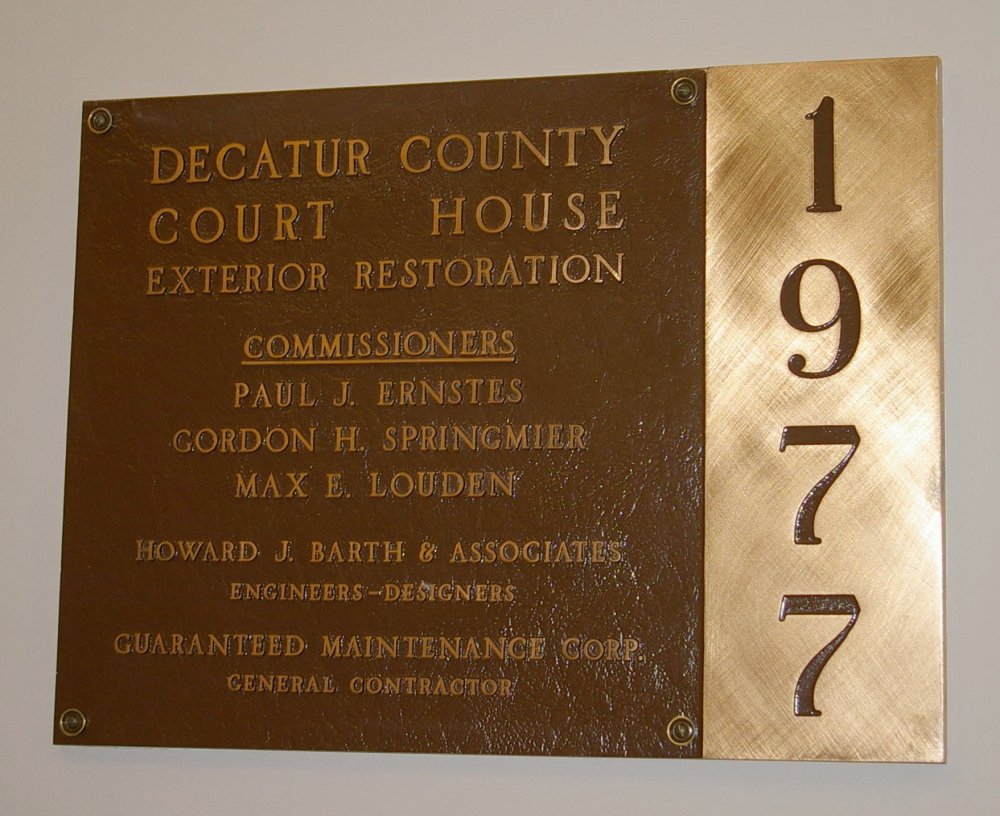 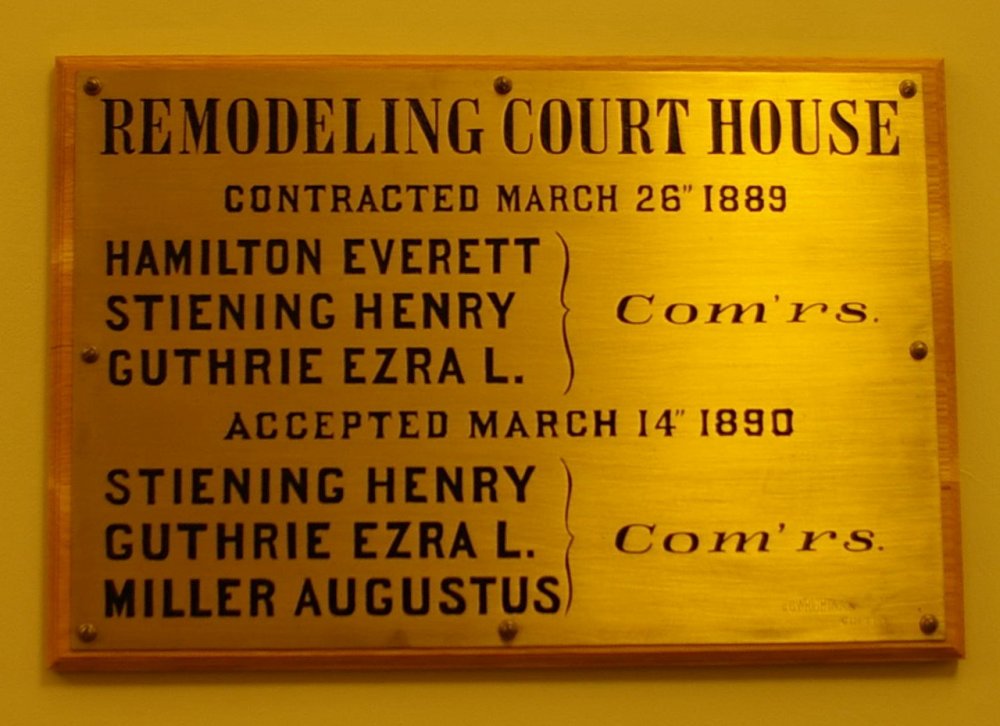 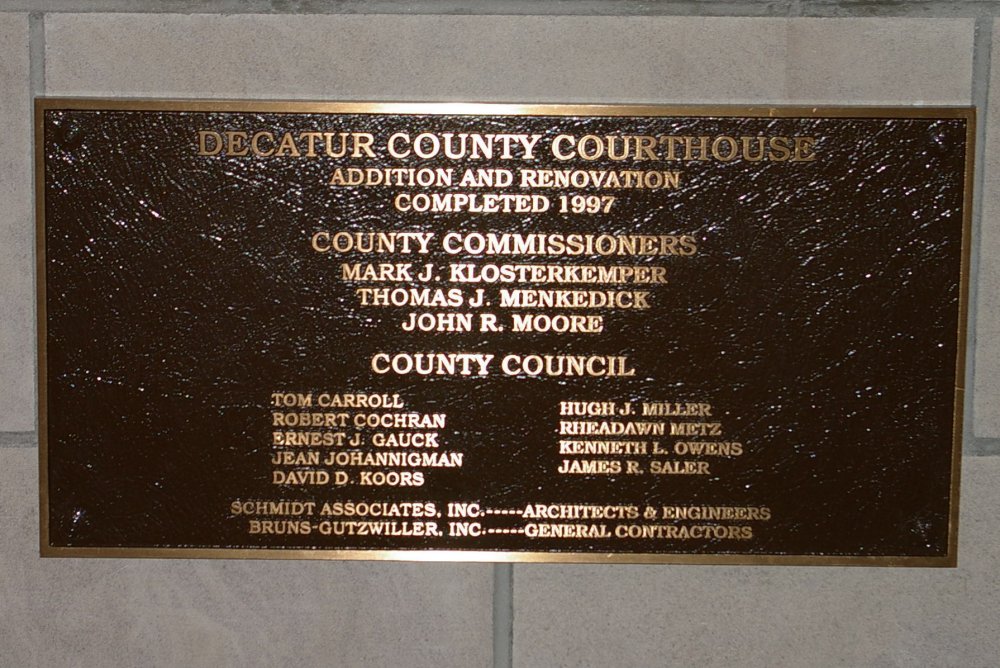