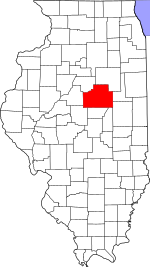 Description: The building faces east and is a three story gray colored stone and concrete structure. The building is located on landscaped grounds of the Courthouse Square in the center of Bloomington to the north of the present courthouse. The east front has a projecting portico with three large arches on the first story and four Doric columns rising from the second story to a pediment at the roof line. There is a balustrade along the flat roof line. On the center of the building is a dome with a limestone drum and a small cupola at the top. In the interior there are broad hallways which meet at the center under the three story rotunda. The rotunda rises over 100 feet into the air and at the top features an allegorical painting representing peace and prosperity. The halls have mosaic floors and wall treatment composed of white colored marble dado which is capped with antique verde serpentine stone. Marbleized plaster, scagliola, panels complete the walls. The building’s ceilings are decorated with plaster cornices and molded leaf and rosette complements. The Honduras mahogany doors have a rail and panel design and beveled glass is used for decorative side lights and panels. The upper stories are reached by a broad white colored marble stairway which features bronze fish-scale screens which are decorated with laurel wreaths, the same type of screen closes the rails around the rotunda opening. Inside the rooms are sand cast plaster cornices and a variety of floor finishes which include mosaic, marble and maple. The original stenciling in the rooms has been lost to the past. The three original courtrooms are decorated with frescoes, marble dadoes and scagliola. The original fresco remains in the Stevenson-Ives library. Other notable architectural features include many beveled and leaded glass panels, scagliola door surrounds, solid bronze wall partitions, a number of original bronze, combination gas and electrical light fixtures and marble counters. The building was destroyed by a fire in 1903 and rebuilt. The architect was George Miller, Paul Moratz and A L Pillsbury of Bloomington. The building now houses the McLean County Museum of History. Description: The building faces north and is a six story concrete and glass structure. The building is located on landscaped grounds in the center of Bloomington. The north center section projects from the main building and has vertical glass windows. On the first story is a canopy supported by concrete pillars. White colored horizontal concrete bands are located on the upper sections. The roof line is flat. The building houses the County Circuit Court of the 11th Judicial Circuit. The building is named as the Law and Justice Center. The building was remodeled from 1988 to 1990. The architect was Hilfinger, Ashbury, Abels and Asociates and the contractor was River City Construction Company. The building was renovated from 1996 to 1997. The architect was Shive-Hattery, Inc and the contractor was P J Hoerr Inc. Description: The building faces south and is a four story concrete and glass structure. The rectangular shaped building is located in the center of Bloomington. The first story is recessed. The east half of the south front and the east side have vertical dividers with vertical windows between. The roof line is flat. The building is named as the Government Center.