Minidoka County is named for the Native American Lakota word for “a fountain or spring of water” or for the Shoshone word for “broad expanse”. 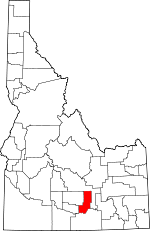 Description:  The building  faces east and is a two story buff colored brick and concrete structure. The building is located on the landscaped grounds of the Courthouse Square in the center of Rupert. The east front has a central entrance has two red colored stone columns and a red stone pediment. The cornice below the roof line is red stone. The roof line is flat. On the west side is the County Jail and Sheriff Office and on the northeast side is the County Judicial Building. Description:  The building faces south and is a one story buff colored brick and concrete structure. . The building is located on the landscaped grounds of the Courthouse Square in the center of Rupert on the north side of the courthouse. The building has an open portico at the entrance. Vertical dividers run along the central section. The roof line is flat. In the interior is the courtroom. The building houses the County District Court and County Magistrate Court of the 5th Judicial District. The building is named as the Sherman J. Bellwood Judicial Building.

See:  The architect Dropping Kelley Hosford and LaMarche of Boise designed the the courthouse in Latah County and the Idaho Supreme Court building.