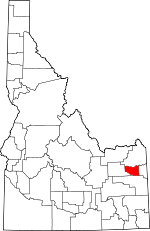 Architect:  C A Sundberg  of Rexburg

Description:  The building faces south and is a two story buff colored brick and concrete structure.The building is located on landscaped grounds in the center of Rexburg. The south front has a projecting center section with recessed entrance having two columns on either side and balustrade on the second story. The building has a buff-colored pressed brick veneer laid in common bond. There are vertical divers along the front. The roof line is flat. The interior retains a number of period features, including its plan, marble and tile hall floor, marble wainscoting in the hallway and stairwells, plaster walls, ceiling moldings, hallway pilasters, wood door moldings and single-Dane office doors. The large courtroom is located on the first story and the smaller courtroom is located on the second story. The building houses the County District Court and County Magistrate Court of the 7th Judicial District. On the west and north sides is a new addition.

History:  The county was created in 1913 and Rexburg was designated as the county seat. The first offices were leased in the old Webster–Winter building at the southwest corner of East Main and 1st Street. The old dance hall in the building was made into a court room and public and private offices, and a jail of four cells was built at the rear of the building. The second and present courthouse was constructed in 1920 to 1921. Description:  The building  faces east and is a two story red colored brick and concrete structure. The building is located on landscaped grounds in the center of Rexburg to the southwest of the courthouse. The roof line is flat.