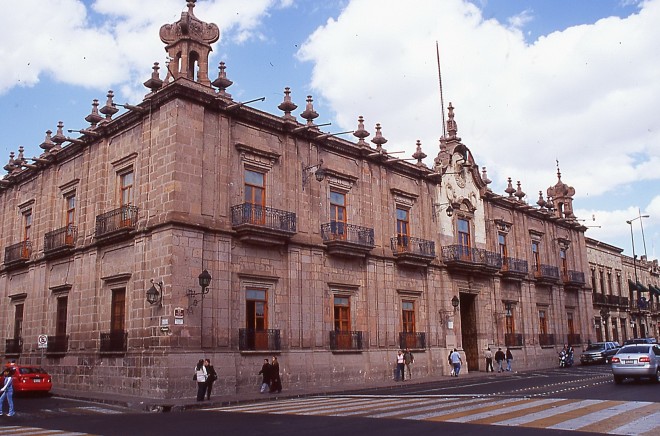 Michoacan derives from the Nahuatl terms “michin” meaning “fish”, “hua” meaning “those who have” and “can” meaning “place”, which put together means “fisherman’s place”.

Description:  The building faces west and is a two story stone structure. The building is located on the north side of the Cathedral in the city centre. The building was originally constructed as the Seminario Tridentino and consecrated by the bishop, Father Sanchez de Tagle on January 23, 1770. The interior has elegant architecture with a grand staircase. The exterior is the baroque style with balconies. The building was acquired on March 12, 1859 and became the Government Palace. On the exterior centre, panels rise from the main doorway, framed in layered mouldings, to the elegant window, covered by a mixtilnear lintel. There are bold cornices and balconies and the roof is toped by a parapet, with repeated finials. At each corner, buttresses support open towers, which add an Oriental touch to the building. There are three patios in the interior. The Governor’s Office is located on the west side of the south patio. The corridors of the main patio are supported by high on pilasters. On the east side is the grand staircase with its walls covered by murals of Mexican Independence, the Reform and the Revolution painted by Alfredo Zalce. On the second floor is the Sala de Recepciones with portraits by Cuevas del Rio. 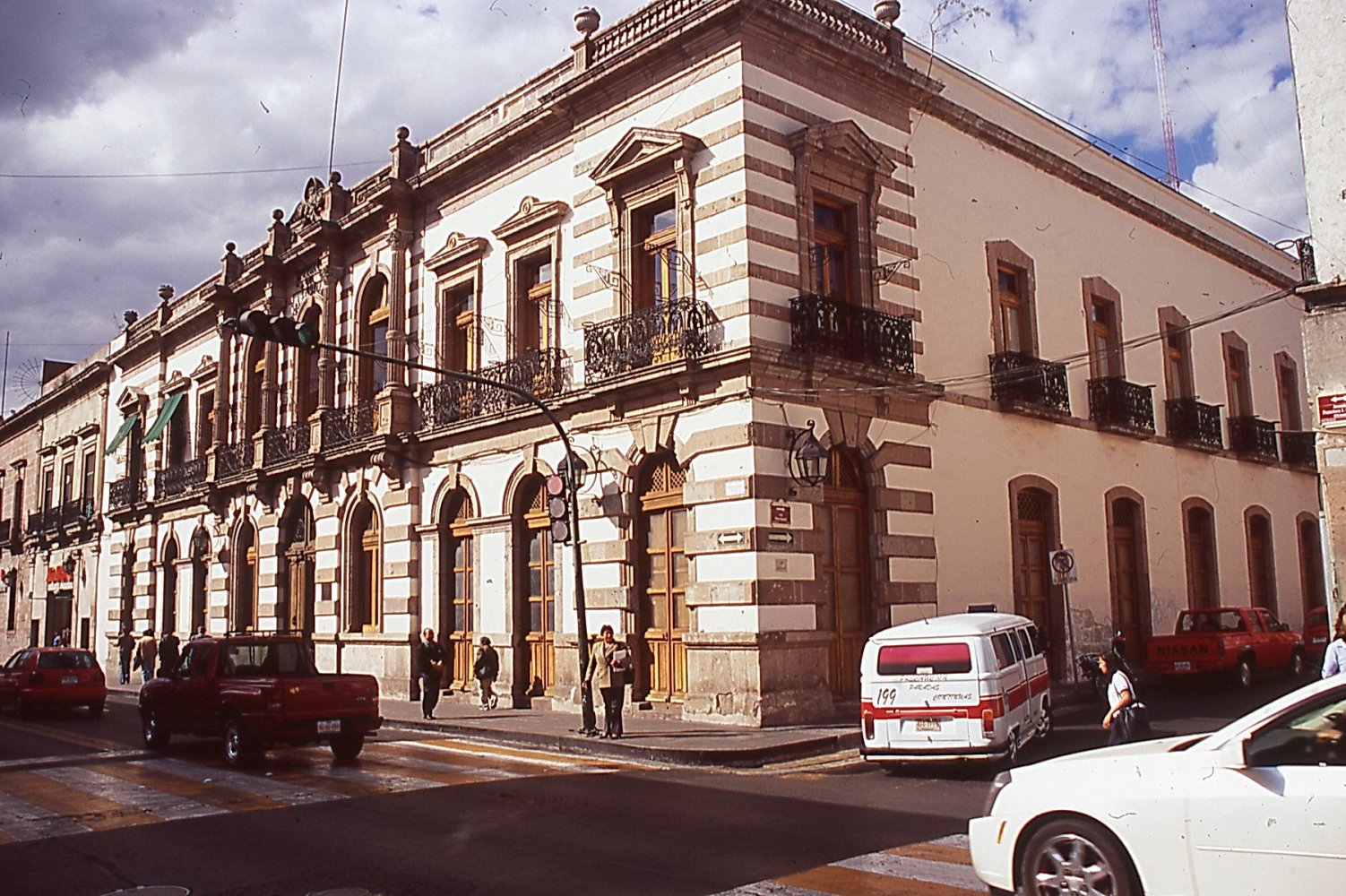 Description:  The building faces south and is a two story stone structure. The building is located in the city centre. The white building was purchased from Jose Maria Anzorena y Foncerrade in the 18th century and is called the “Casa del Intendente Jose Maria Anzorena”. Its present fin-de-siecle aspect dates from a remodeling in 1897. The building contained the library of the University until it became the Legislative Palace. There is an interior patio and on the north side, the patio has been enclosed to create the Legislative Chamber. The building houses the State Congress (Honorable Congreso del Estado de Michoacan). 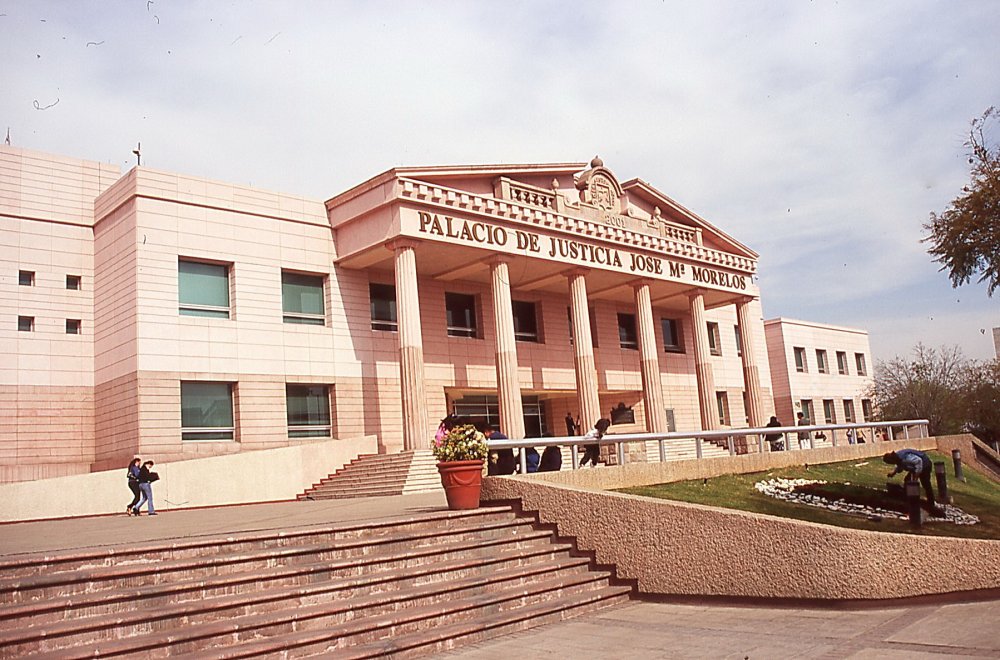 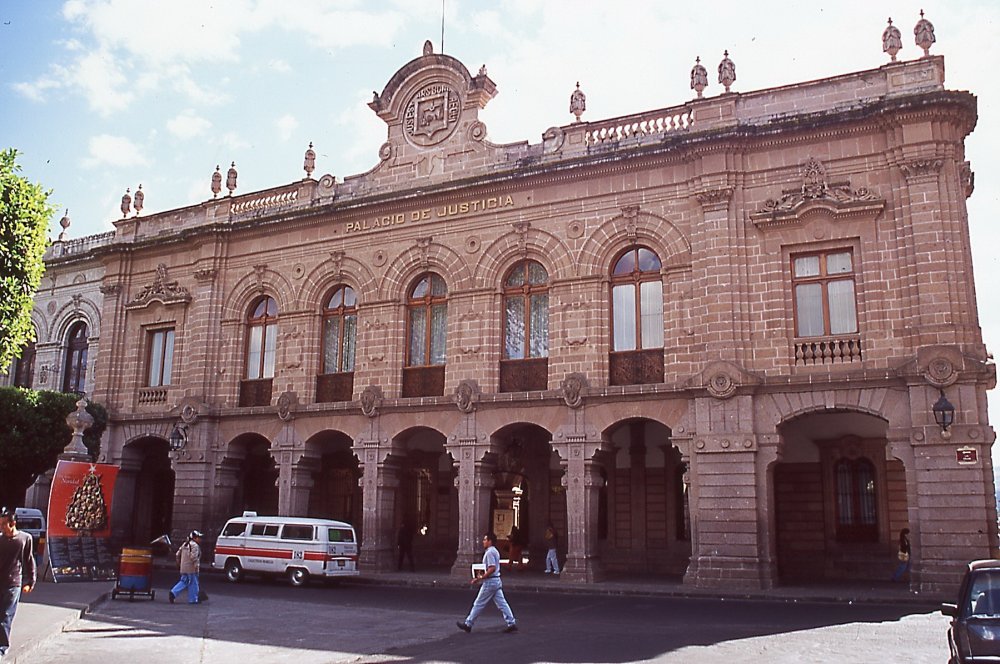 Description:  The building faces north and is a two story stone structure. The building is located to the southwest of the Cathedral in the city centre. The building  was built between 1682 and 1695 to serve as the City Hall. The building served as the casas consistoriales, seat of the viceregal government. In 1885, the building housed the Judicial Department of the State. The building was largely rebuilt in handsome eclectic style by Wodon de Sorinne in 1883 to 1895. The north façade is a mixture of French and baroque styles. There are baroque arches on the main patio, lacking corner supports on the lower floor. In the patio is a mural by Agustin Cardenas. On the second floor are pre-Hispanic decorative elements. The building now houses an art gallery. 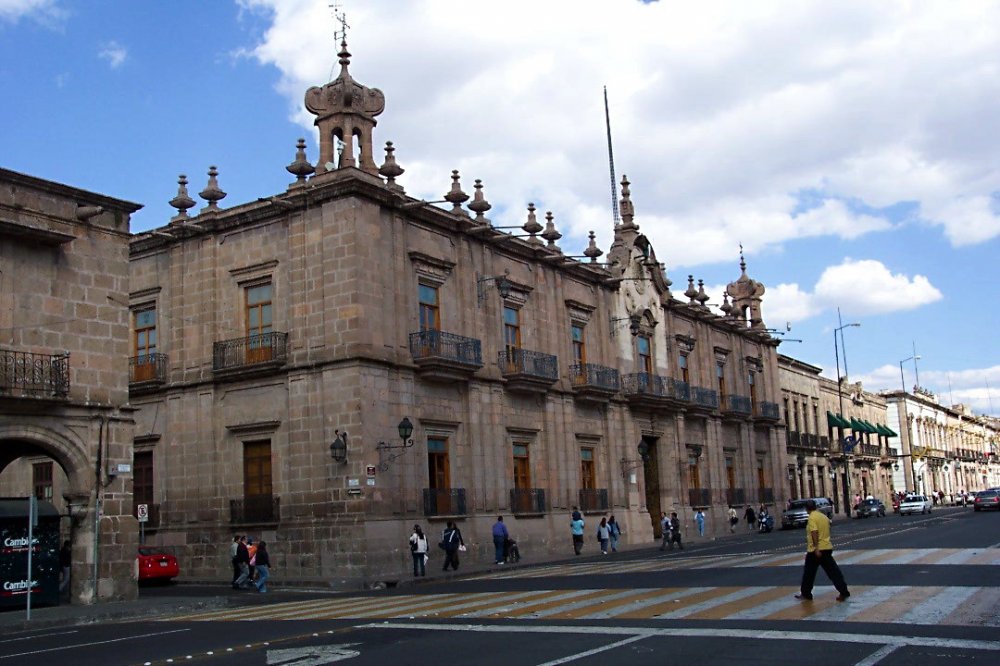 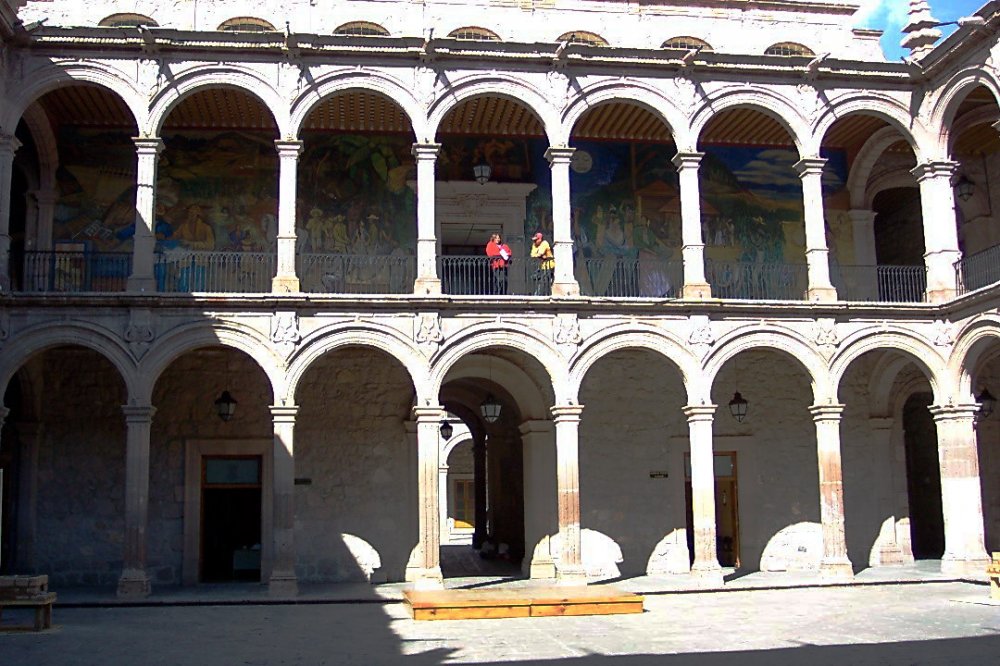 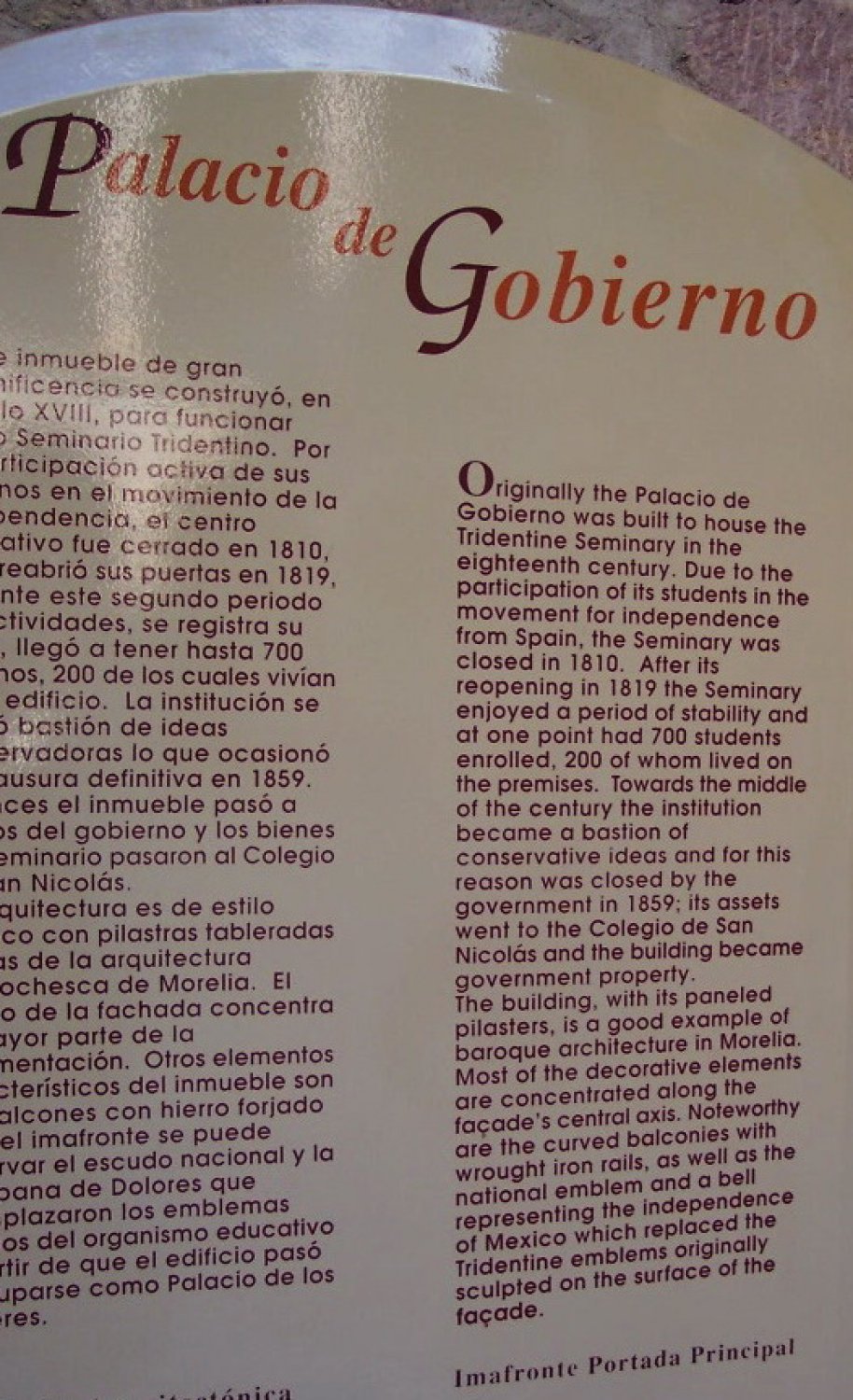 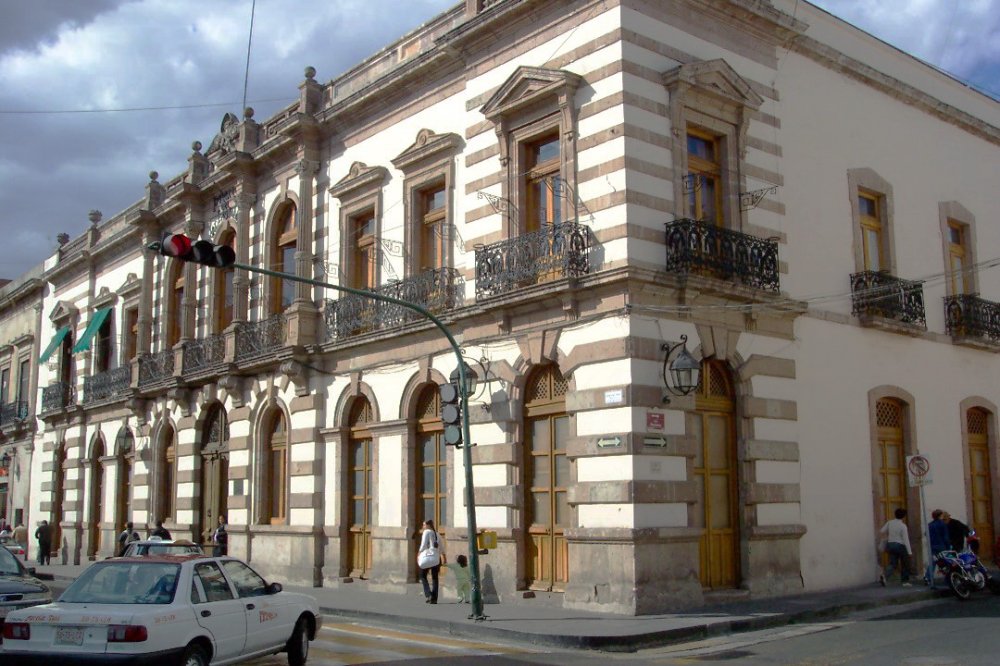