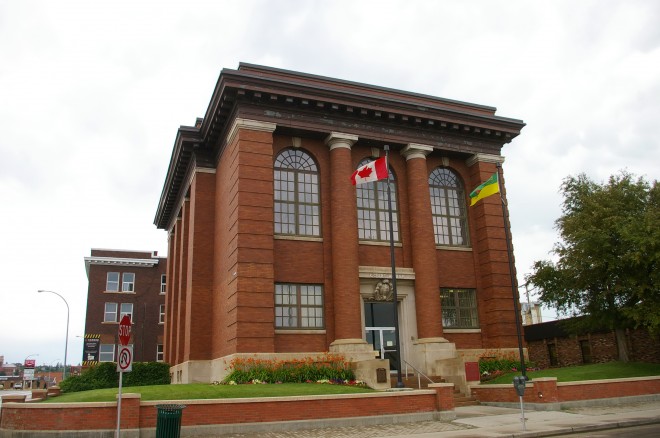 Moose Jaw is named for Moose Jaw Bone Creek as shown on a map by surveyor John Palliser in 1857 and comes from the Plains Cree name “moscastani-sipiy” meaning “a warm place by the river” and the word “moose gaw” meaning “warm breezes”.

Location:  Moose Jaw is located in the south central part of the Province.

Architect:  Frank Darling and J A Pearson of Toronto, Ontario

Description:  The building faces south and is a two story red coloured brick and limestone structure. The building is located on landscaped grounds in the centre of Moose Jaw. The south front has two large red coloured brick columns with recessed central entrance framed with limestone and with crest at the top. . The second story windows are large and arched. The centre sections on the east and west side, project slightly from the main building. A wide cornice runs below the flat roof line. The Queen’s Bench courtroom is located on the west side of the second story. On the west side of the first story is a small courtroom. The building houses the Sheriff’s Office. In 2013, the ceiling in the main courtroom on the second story collapsed. The building was restored in 2015. The contractor was Poole Construction Company Ltd.

See:  In Moose Jaw is the Provincial Court located in the Government Building on the west side,