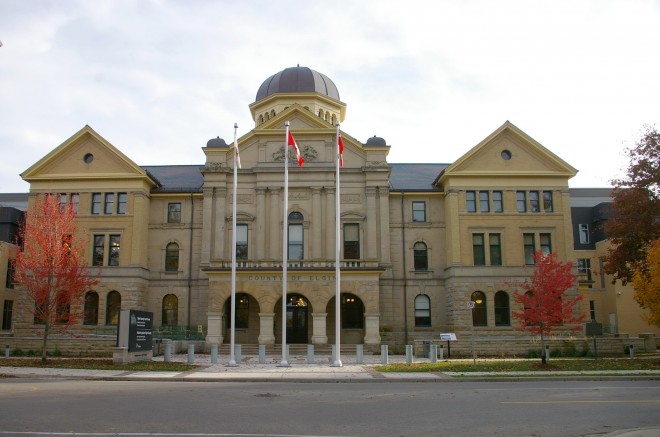 Elgin County is named for Lord Elgin, who was the Governor General of Canada.

Description:  The building faces north and is a three story buff coloured brick and stone structure. The building is located on spacious landscaped grounds. The north front has a one story stone portico with three large arches. On the second and third stories are four columns with wide peak above at the roof line with a coat of arms. The east and west wings project from the main building and rise to gables at the roof line. The roof is hipped. On the centre of the roof is a large octagonal dome with small windows and a green coloured dome. After a fire on July 1, 1898, the east and west wings and dome were added. The architect was Neil Darrach. From 2011 to 2014, the building was renovated. The architect was NORR Ltd. And the contractor was EllisDon Corporation. On the east side is the Registry Office designed by Kivas Tully and built in 1874. Additions were constructed in 1880 and 1909.