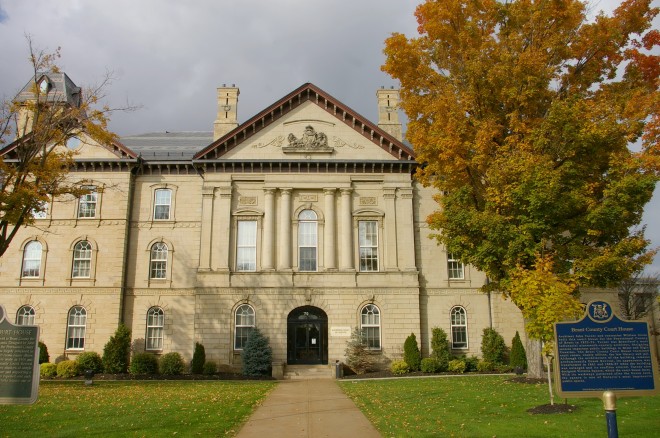 Brant County is named for Joseph Brant, who left New York State with the Six Nations and settled in the region and “ford” is a river crossing.

Description:  The building faces south and is a two story brick and stone structure. The building is located on spacious landscaped grounds and on the south side is Victoria Square. The building contained court rooms, county offices, the law library and jail. The centre block façade has two clusters of simple Doric columns rising from the second floor and supporting a triangular pediment. Identical pediments are repeated over each of the wings. An addition was built in 1861. The building was enlarged and its roof line altered in 1886 to 1887. The building houses the Superior Court of Justice. On the east side is the Old Registry Office. Description:  The building faces east and is a two story pink coloured stone and concrete structure. The windows are vertical and the roof line is flat. The building is rented for the Ontario Court of Justice. On the south side is the Drug Court. Description:  The building faces north and is a two story grey coloured concrete structure. The building forms the south part of the City Hall Complex. The entrance on the north side is recessed. The windows are recessed and horizontal. On the west side is a high concrete tower. The roof line is flat. The building houses the Ontario Court of Justice Provincial Offences.