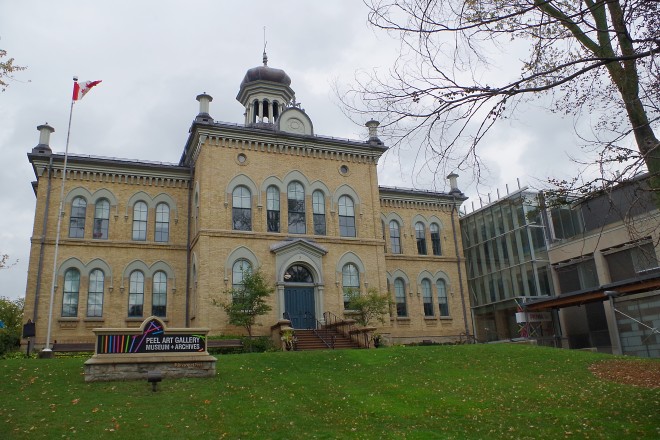 Peel Regional Municipality is named for Robert Peel, who was the Prime Minister of the United Kingdom.

Description:  The building faces southwest and is a two story buff coloured brick, stone and wood structure. The building is located on raised landscaped grounds. The southwest front has a central projecting section with arched entrance framed with stone and with pediment above. The eave projects from the roof line. The windows are arched with stone trim. On each corner of the roof is a circular column with cap and above the entrance is a raised semi-circular frieze. On the centre of the roof is a round cupola with arched openings and black coloured onion shaped dome. Other distinguishing features include: paired round-headed window openings with drip mouldings in the form of pointed arches; semi-circular fanlight transoms above door openings topped by Gothic labels like the windows; and a Greek pediment. The building has a hip roof and a rusticated limestone foundation. The building houses The Peel Art Gallery, Museum and Archives. 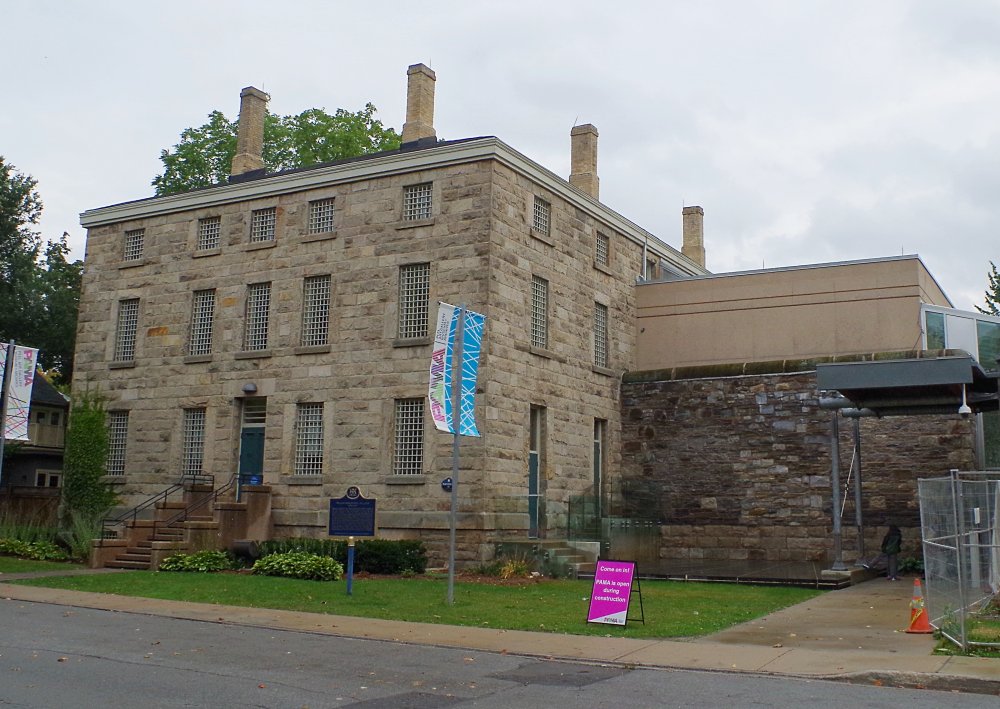 Description:  The building faces northwest and is a three story limestone structure. The rectangular building is located on the northeast side of the old courthouse. The northwest front has a central entrance on the first story.  The third story windows are square. The building has a hip roof and six large brick chimneys.

Note:  The Prison Inspectors Department rejected the plans of William Kaufmann and designed the building itself. 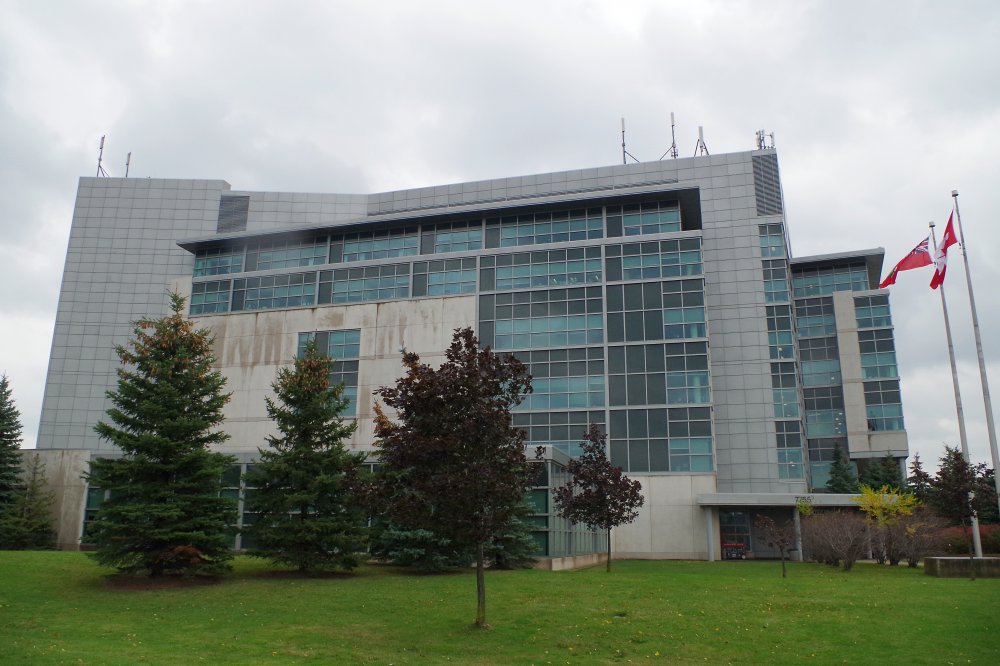 Description:  The building faces southwest and is a six story concrete, steel and glass structure. The building is located on landscaped grounds. The entrance is located at the west corner with an extended canopy supported by columns. The building has blue coloured glass walls with concrete slab facing. The roof line is flat. The building houses 34 courtrooms and is named as the A Grenville and William Davis Courthouse and houses the Superior Court of Justice. A six story addition is under construction on the southeast side in 2016 to 2017. The architect and contractor is Norr Limited of Toronto. Description:  The building faces southeast and is a two concrete and glass structure. The building is located on landscaped grounds on the northeast side of the A Grenville and William Davis Courthouse. The southeast front has two circular towers with recessed section between with recessed entrance. The windows are small and recessed. The roof line is flat. The building contains courtrooms. 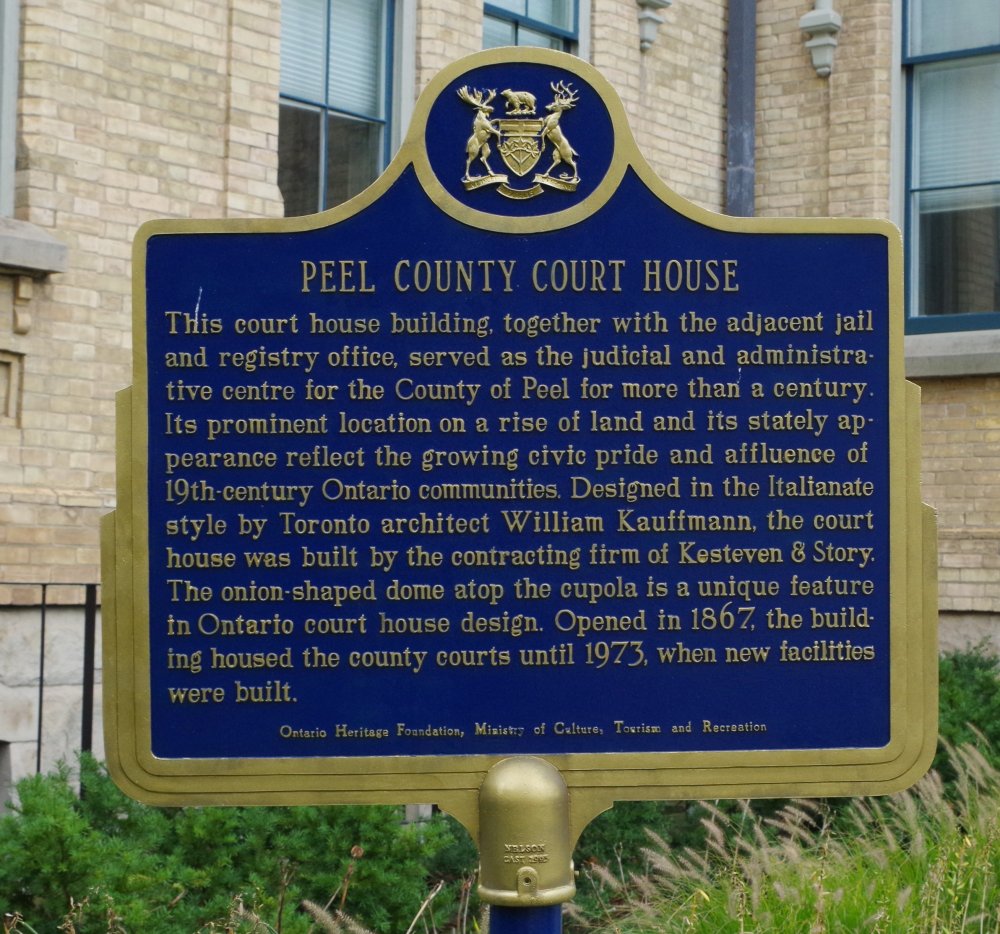 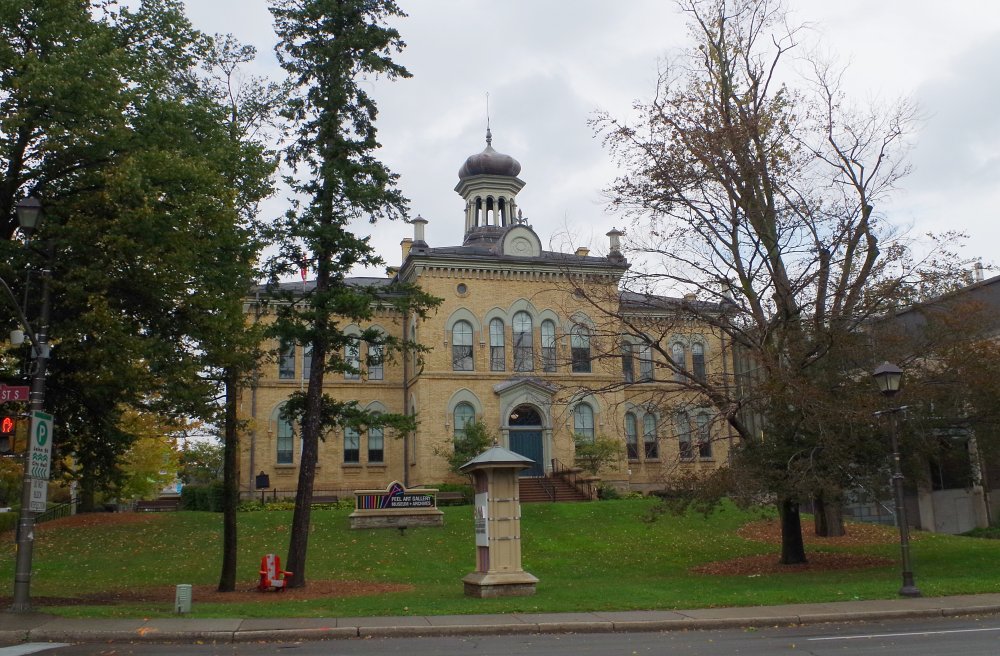 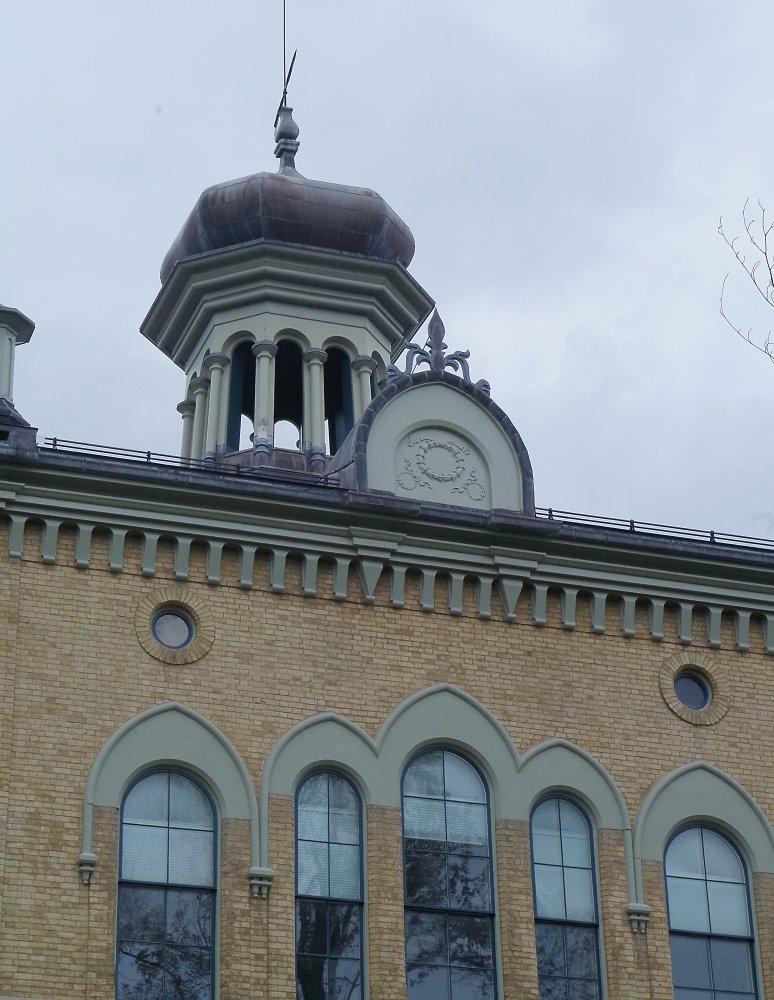 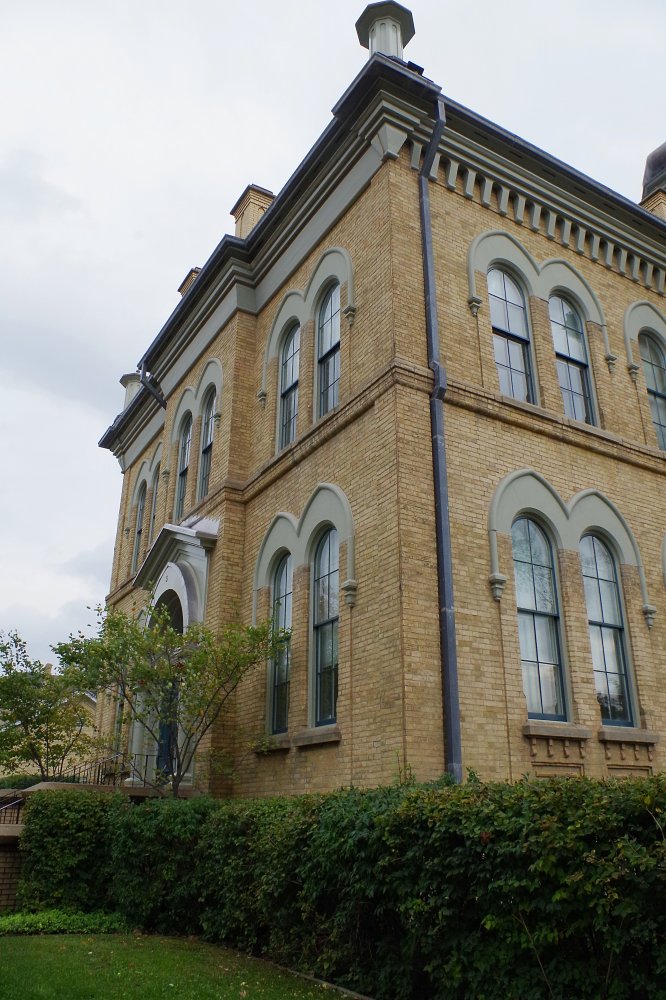 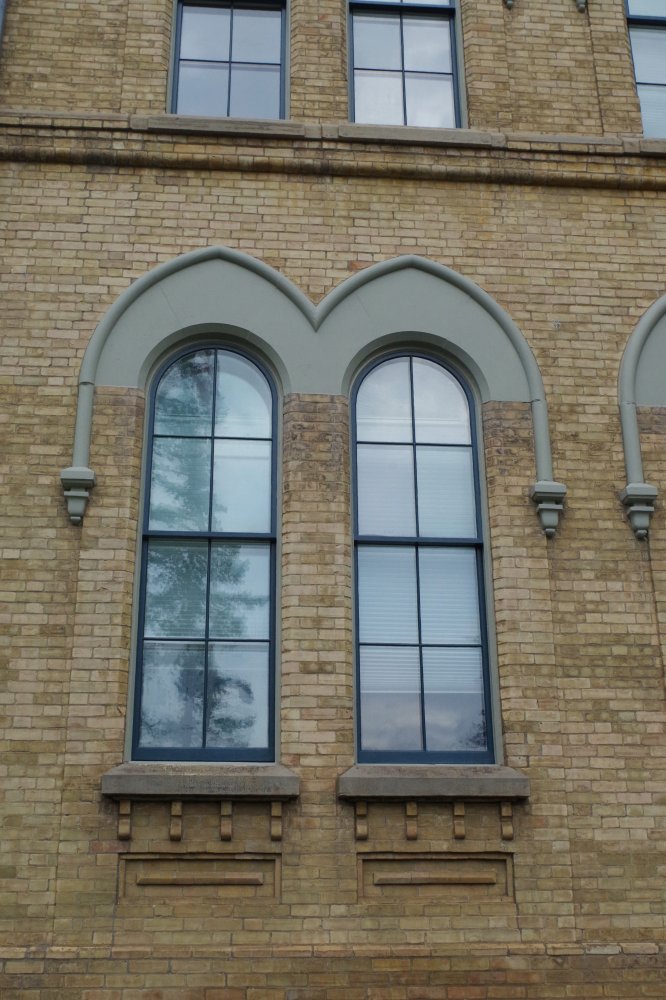 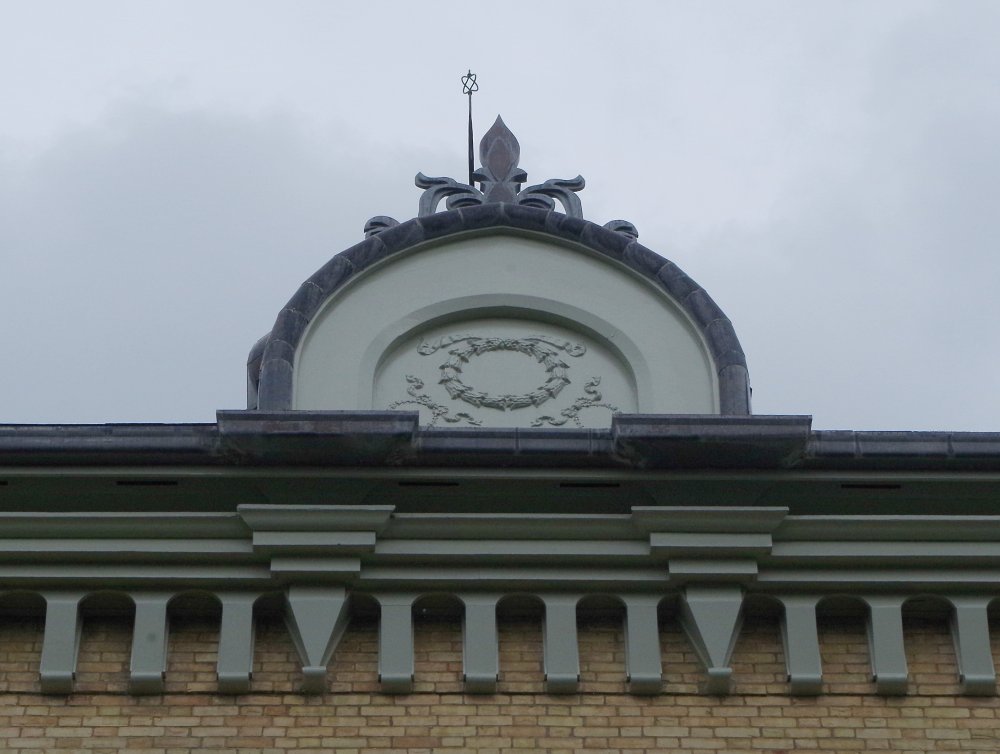 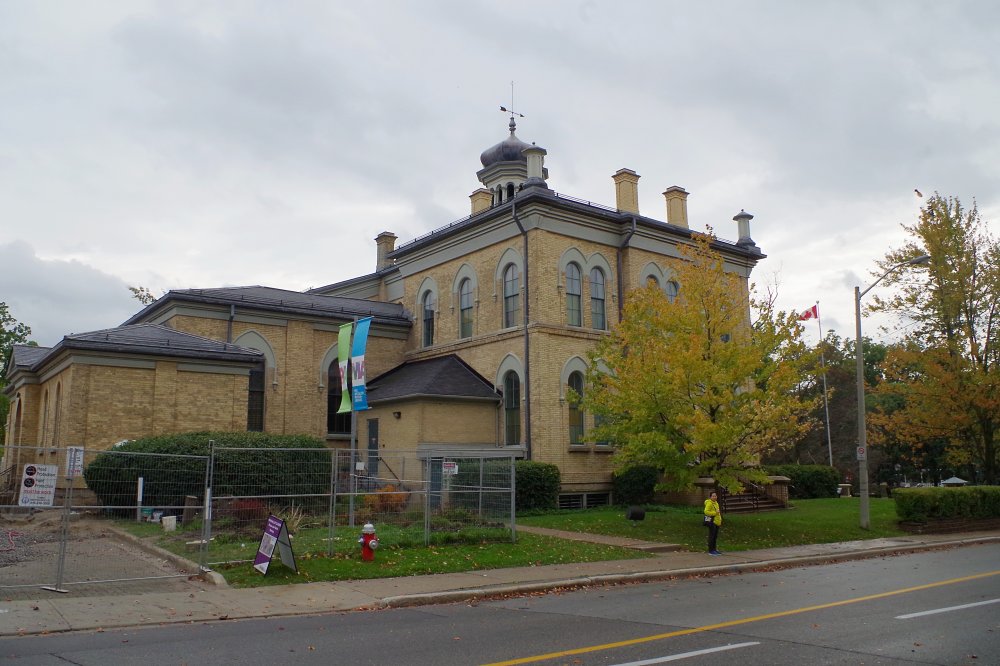 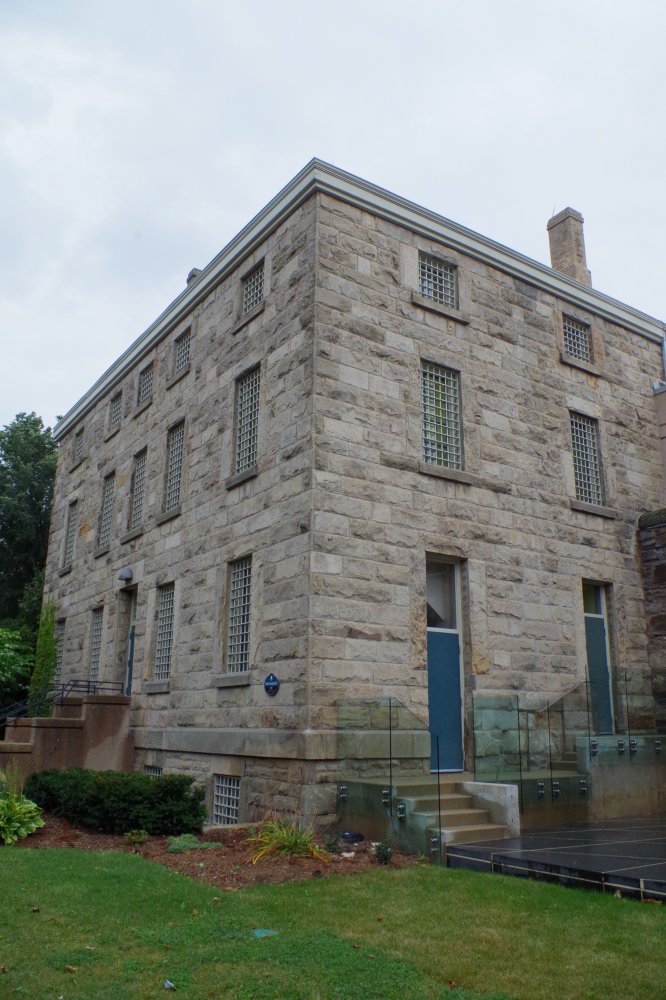 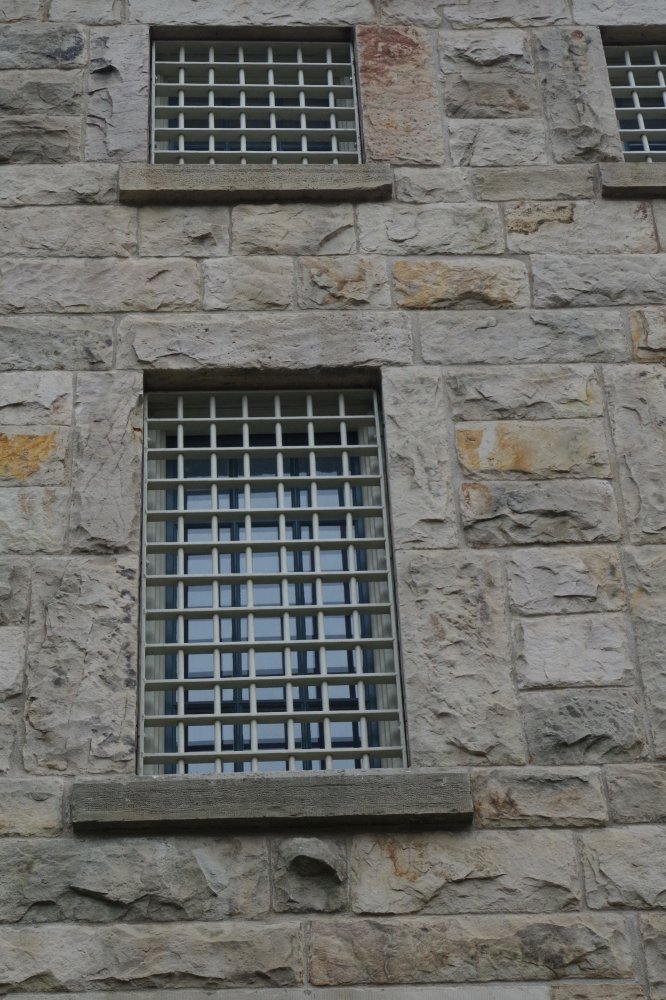 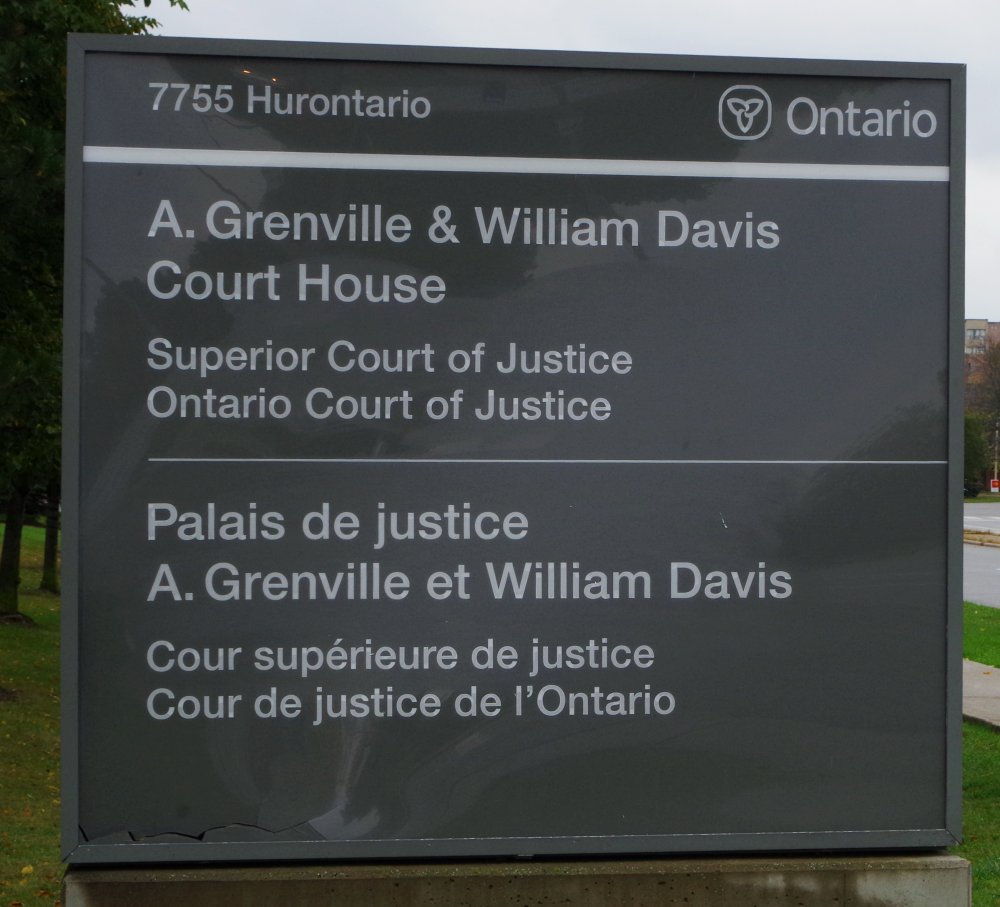 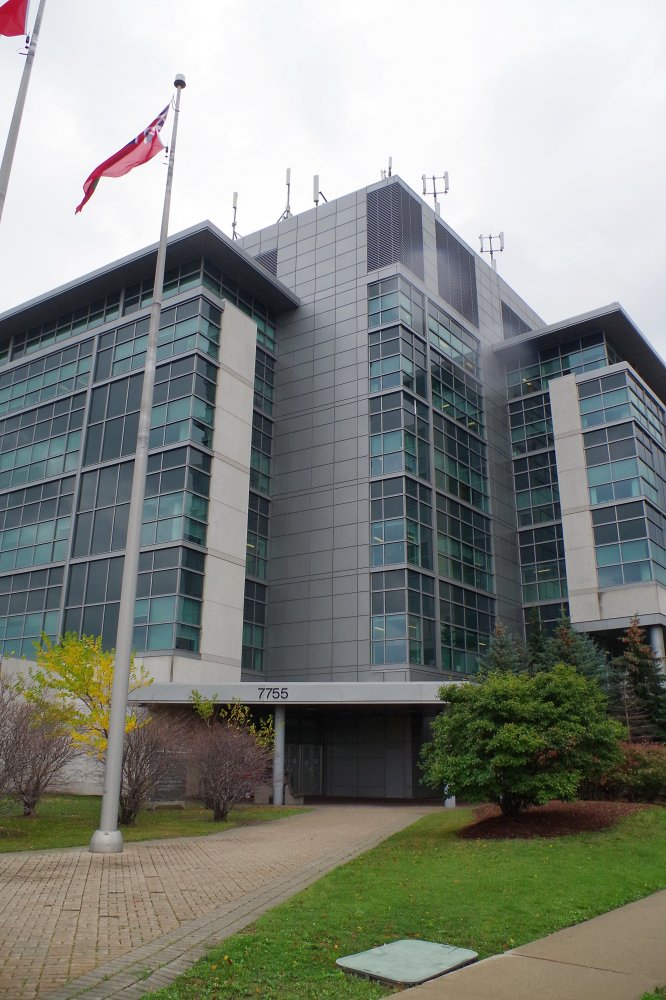 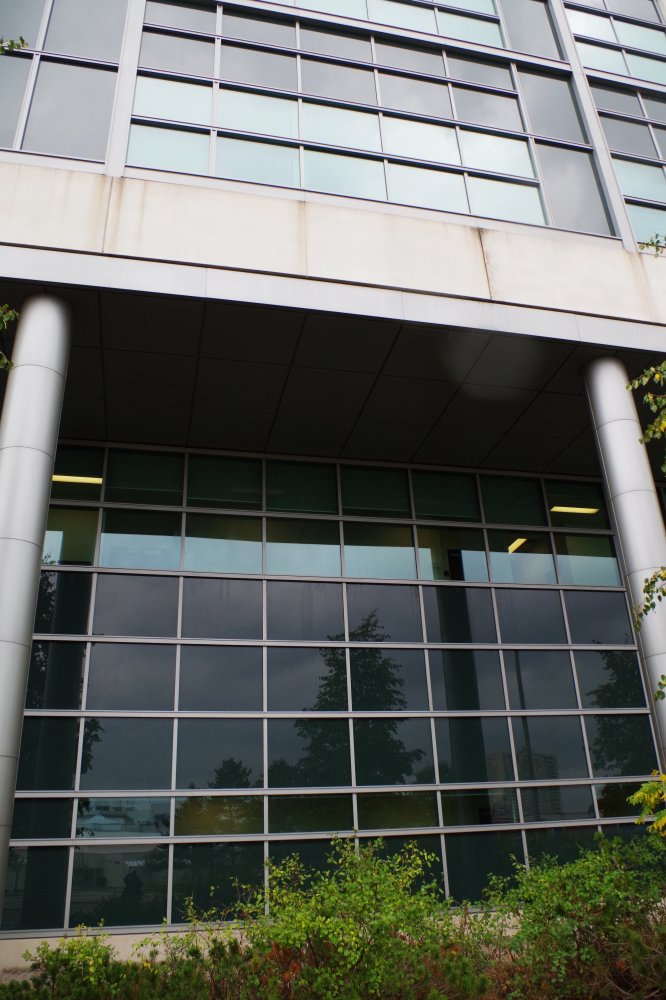 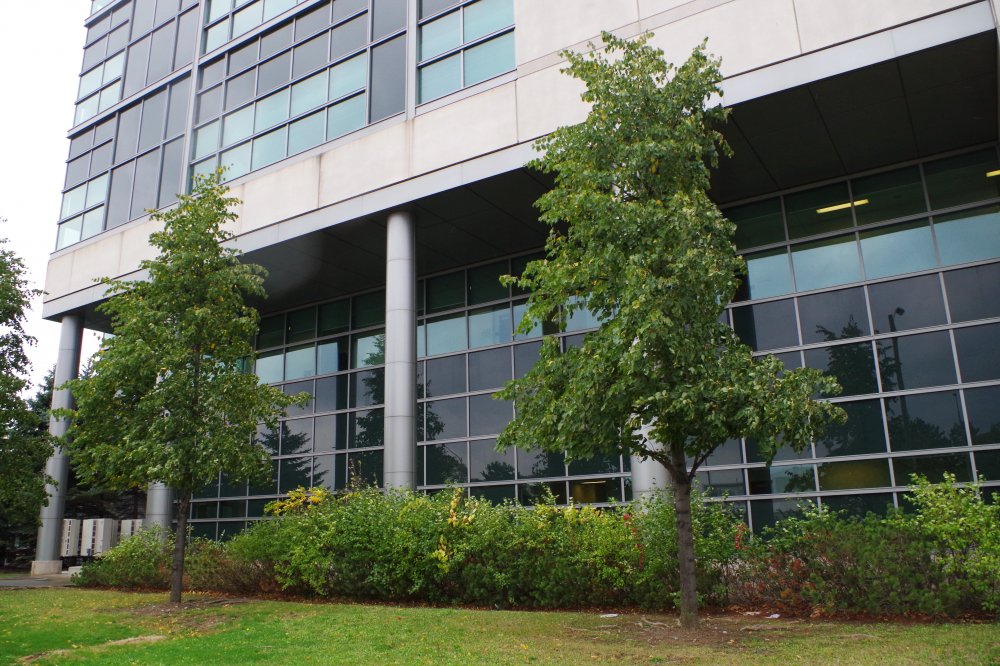 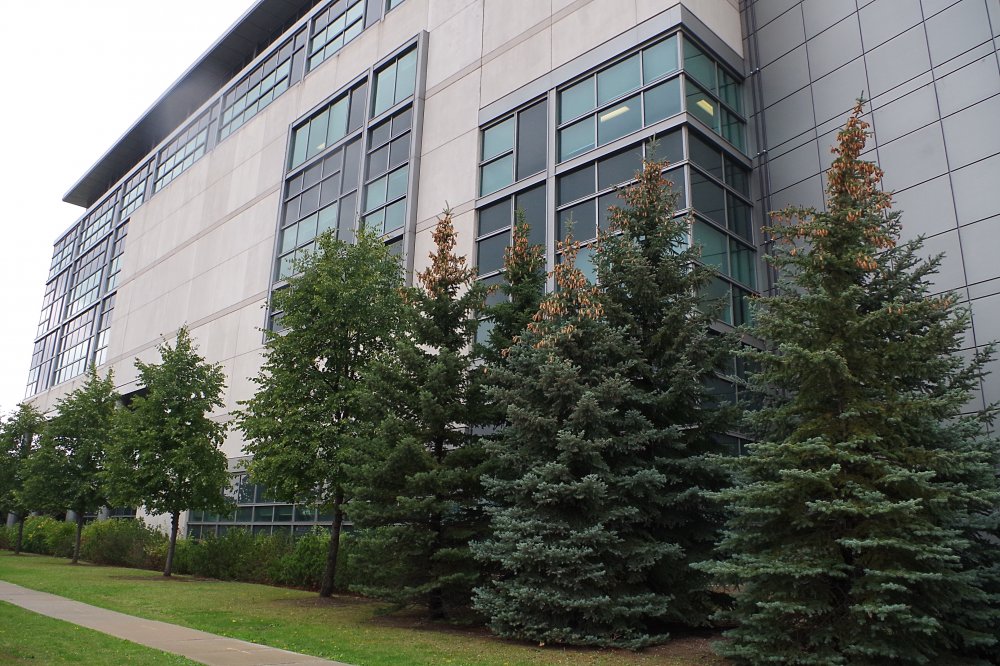 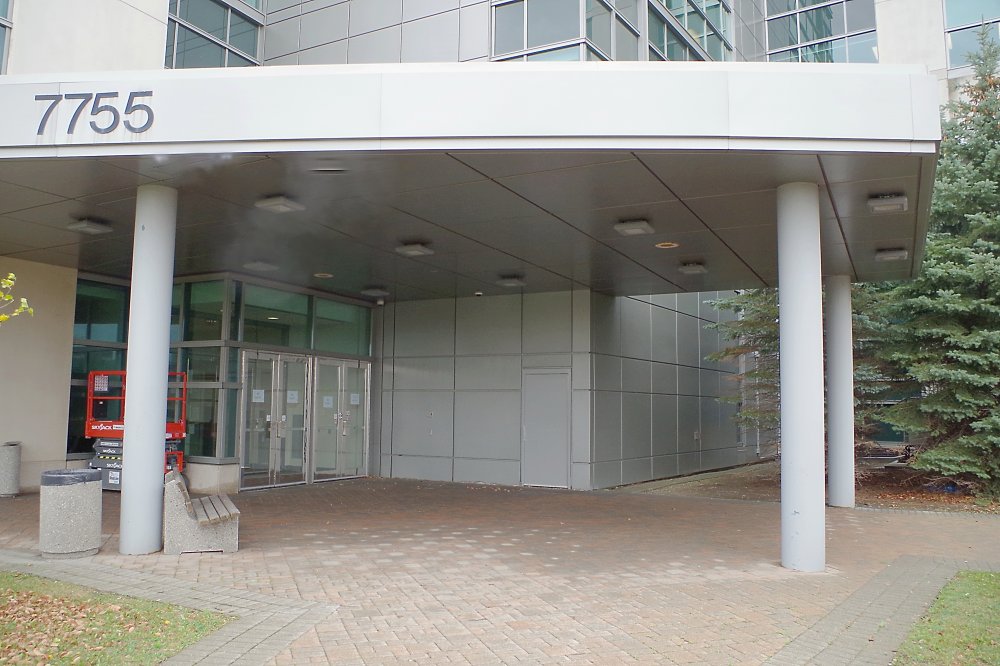 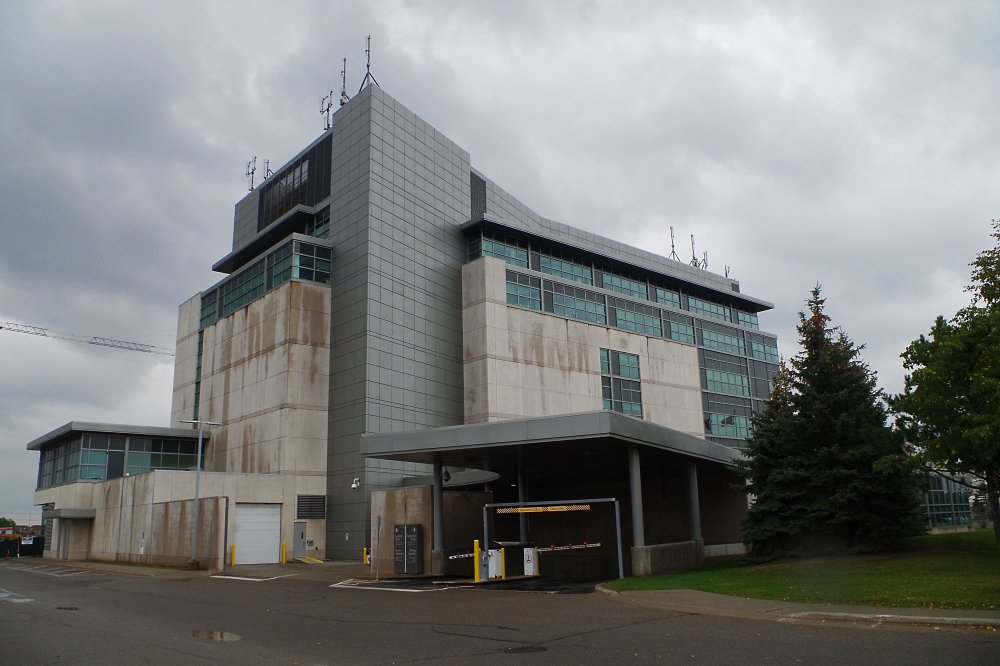 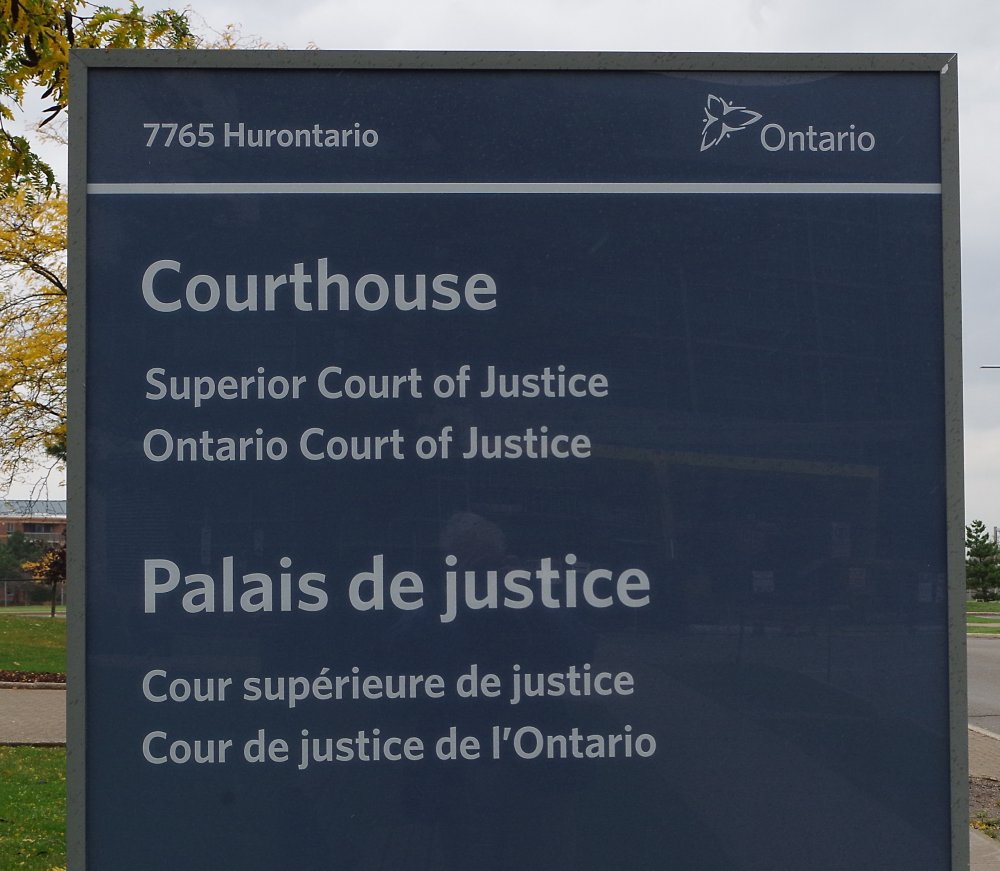