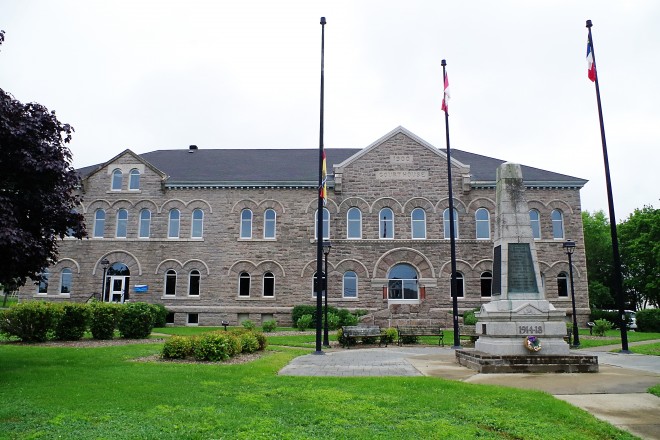 Gloucester County was named for Gloucestershire in Great Britain.

Description:  The building faces north and is a two story grey coloured granite and sandstone structure. The building is located on landscaped grounds to the south city centre. The north front has arched windows trimmed with sandstone and large arch where the main entrance was located. A section rises at the roof line showing the date of construction. A smaller section towards the east side rises at the roof line. The roof is hipped. The large courtroom is located on the north side of second story.In 1972 the three story east wing was constructed. There are two courtrooms located in the addition.The architect was Ray & Steeves and the contractor was Connolly. In 1993, an atrium was constructed between the old jail on the southwest and the new wing on the southeast.

Note: The previous court house was a three-story rectangular building, measuring 86 feet by 48 feet A gaol, 51 feet by 36 feet, extended from the rear.