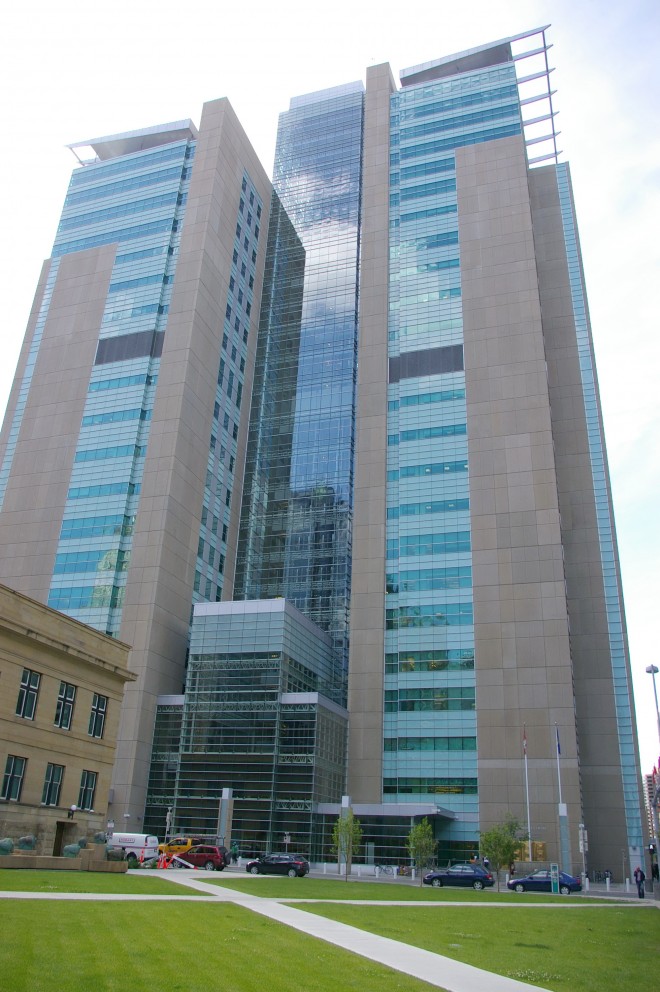 Calgary is named for Calgary on the Isle of Mull in Scotland or from the old Norse words “kald” and “gart” meaning “cold” and “garden” or the name might be  Gaelic for “clear running water” or “bay farm”.

Location:  Calgary is located in the southwest part of the Province along the foot of the Rocky Mountains..

Description:  The building faces east and is a twenty-six story steel, concrete and glass structure. The building consists of a pair of towers being a 22 story tower on the south and a 24 story tower on the north and linked by a 26 story atrium. The east side has a high five story glass entrance section. The windows are horizontal. The archest wasand the contractor was  The structural engineering was provided by Stantec. 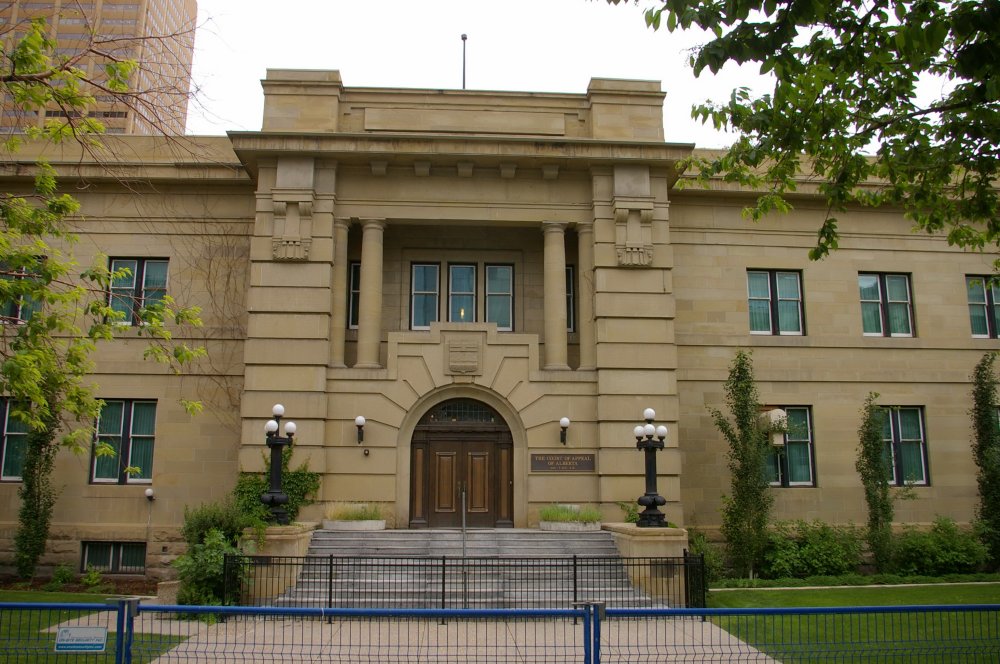 Description:  The building faces south and is a two story steel and buff coloured sandstone structure. The rectangular shaped building is located on landscaped grounds on the east side of the new courthouse. The south side has an ornate central entrance with an entablature flanked by relatively simple wings. The main entry doors, with their elaborate fittings and bronze inlays have been reconstructed. The court moved in 1962 to the 1962 courthouse along the east side. From 1964 until 1975, the building housed the Glenbow Alberta Institute Museum. The building was renovated in 1984 to 1986. The architect was Gerald L Forseth Architect Limited. Then the building housed the appellate court from 1986 until 2001. 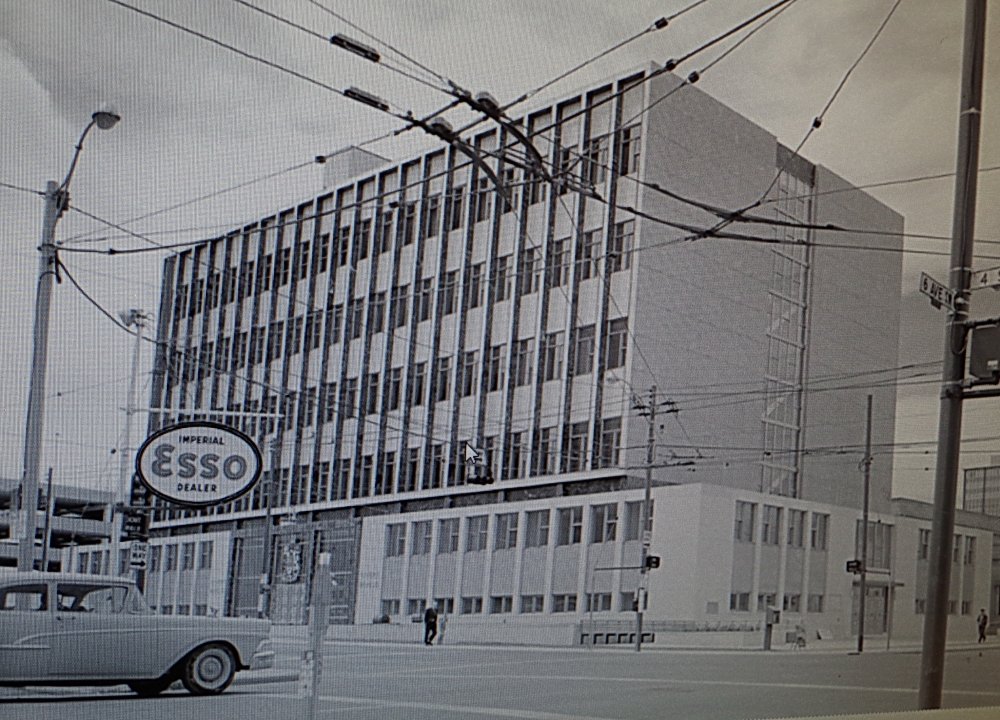 Description:  The building faced easy and was a a five story reinforced concrete and steel structure. The building was located in the centre of Calgary on the east side of the old courthouse. The building had marble, granite and Tyndall stone facing on the exterior. A 10-foot-high Canadian coat of arms cast in bronze by a Vancouver firm was installed over the entrance. Massive double glass and brass front doors. The fifth floor included judges’ offices and library, secretaries’ offices and a lounge area; the fourth floor had lawyers’ library, lounges and locker rooms; the second and third floors had eight courtrooms. The operations of the sheriff, clerk of the court, court reporters and probate court were housed on the second floor, while the ground floor had offices for the RCMP, Attorney General’s Department, family courts, a staff lunch room and storage vaults. Two public and two private elevators. The building was enlarged in 1974. The architect was Vic Bathory and the contractor was Cana Construction Co. Ltd. of Calgary. The building was torn down when the current courthouse was completed and the site became a park. 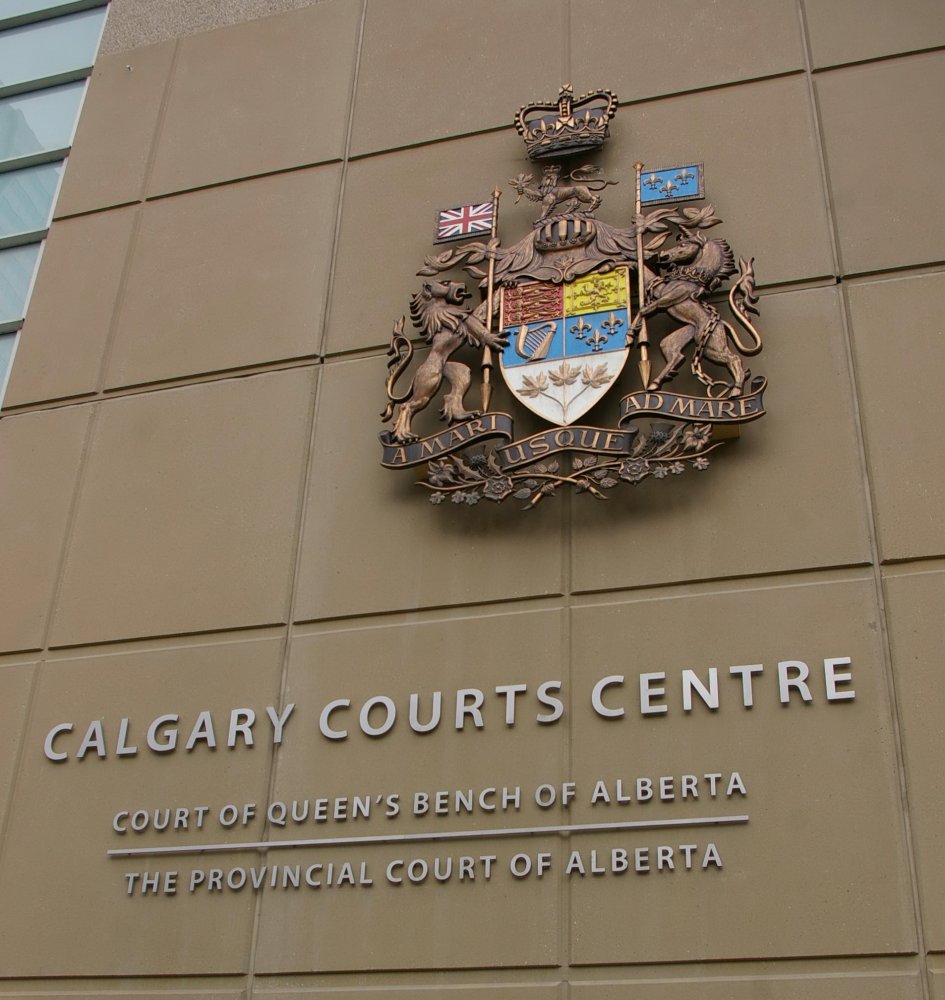 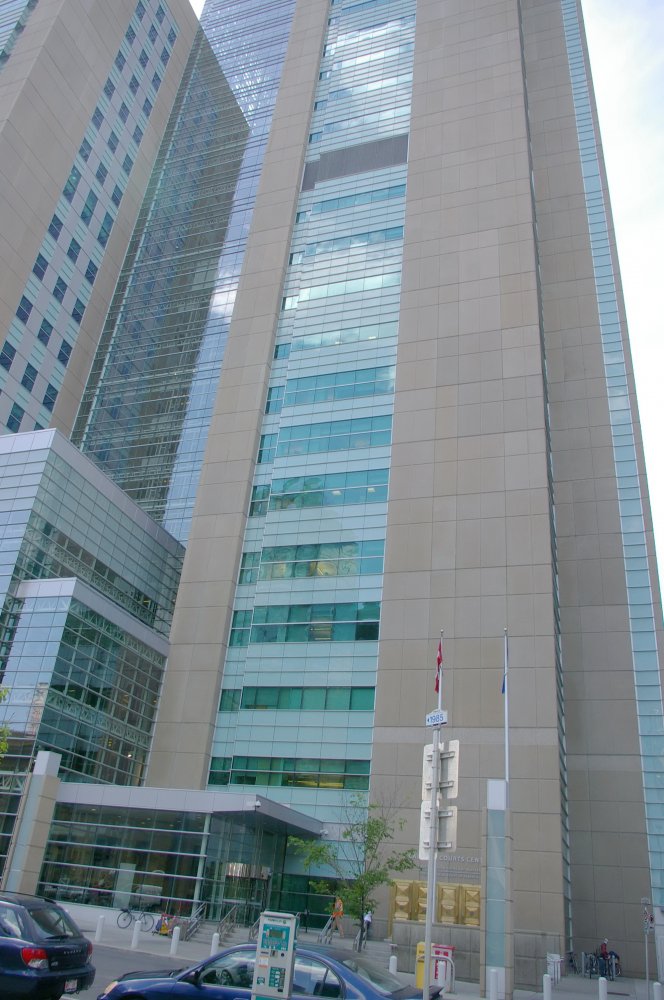 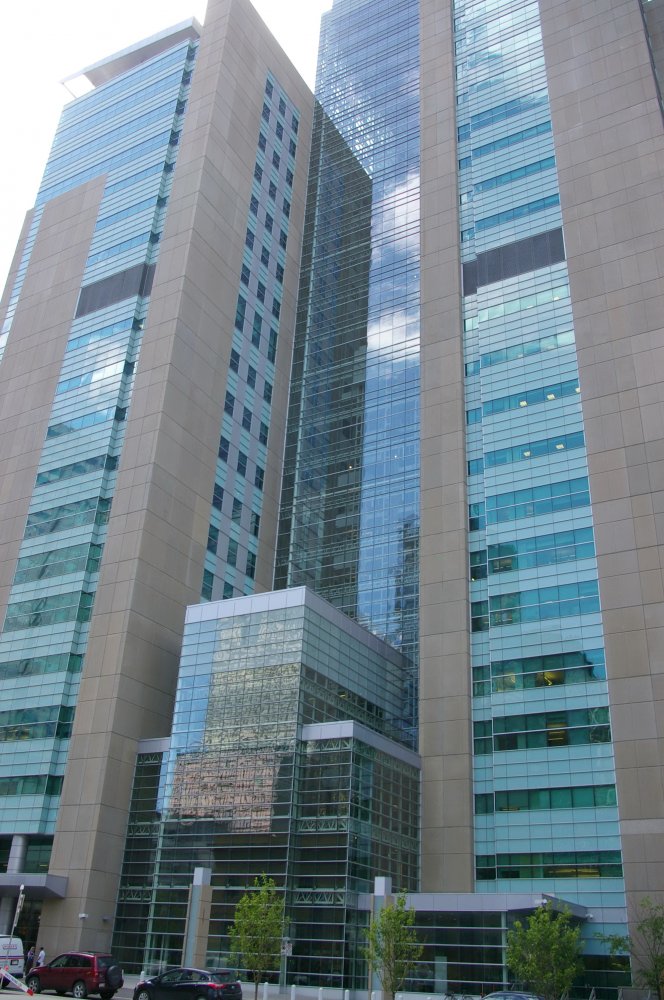 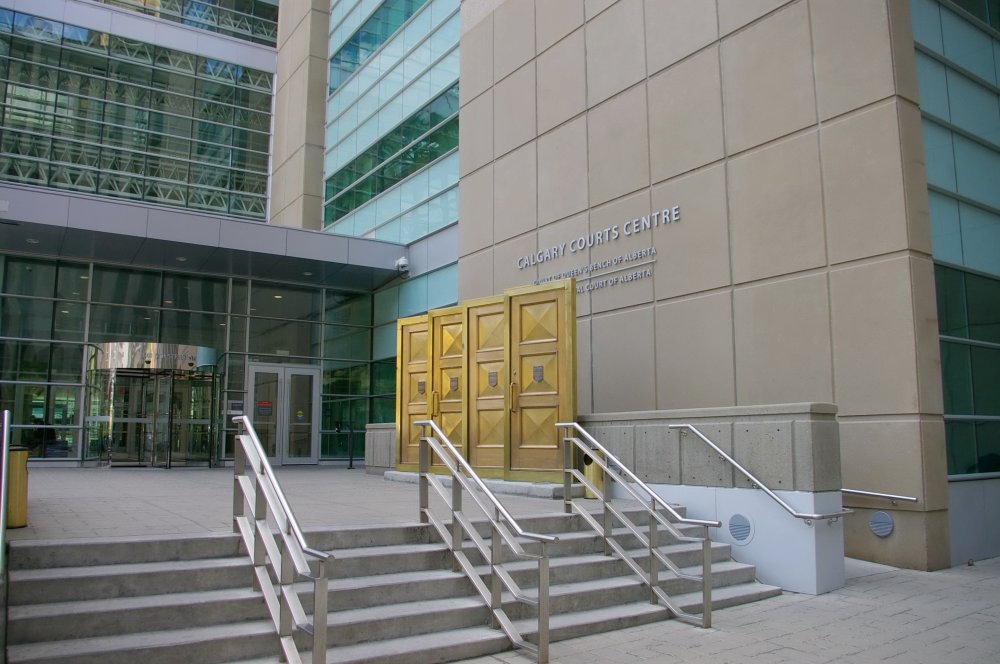 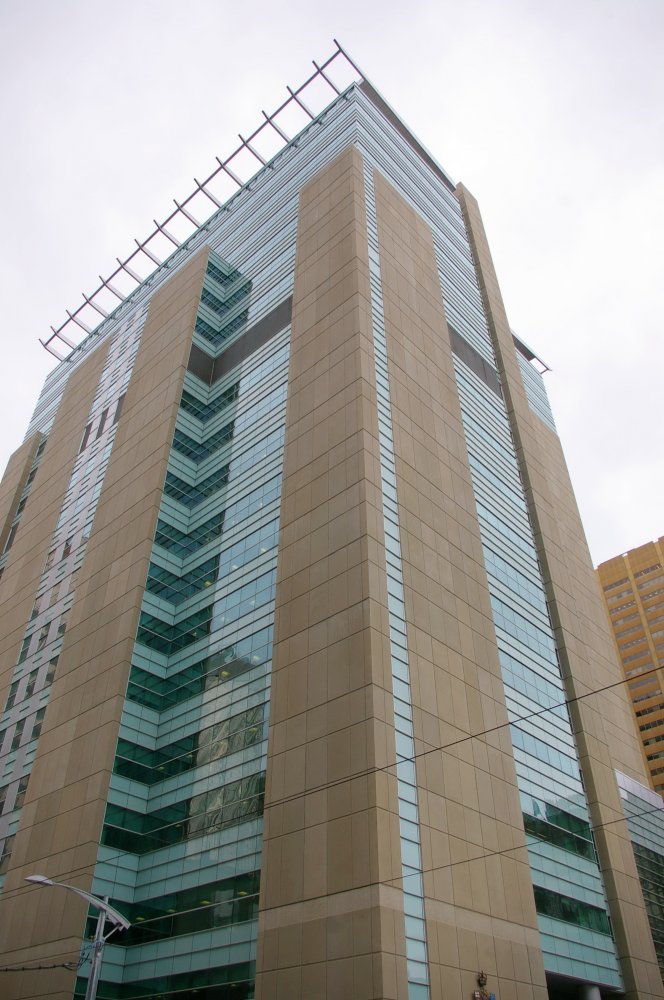 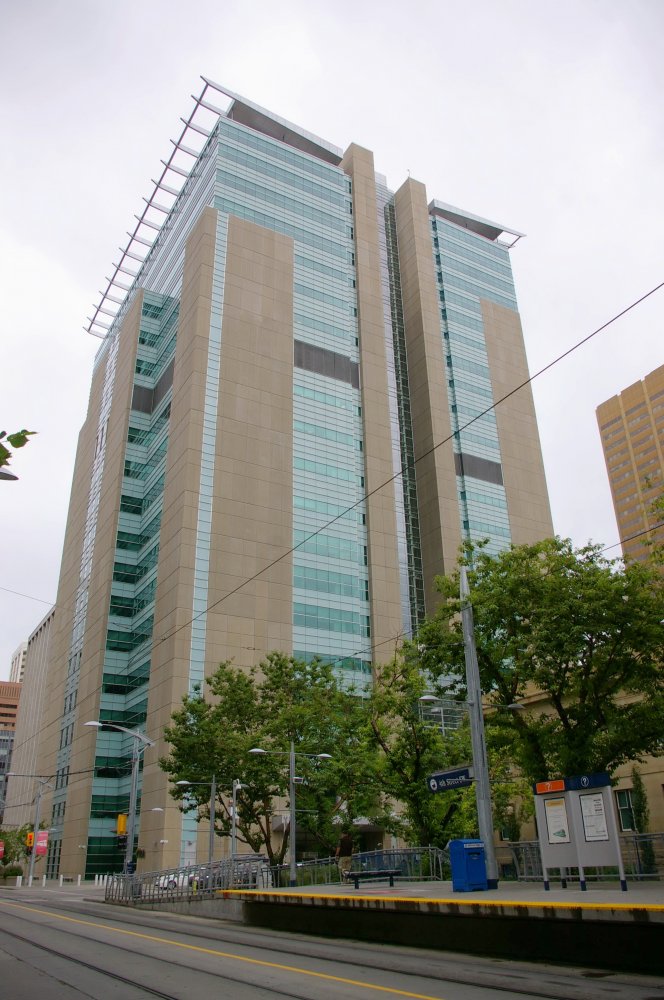